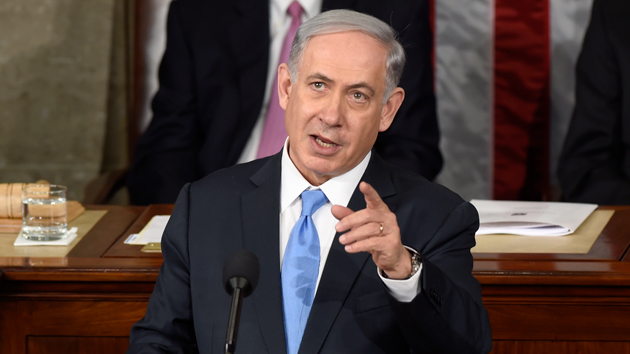 Israeli Prime Minister Benjamin Netanyahu’s speech to Congress has been covered as a spectacle orchestrated (perhaps in a misguided fashion) by the conservative GOP-Likud alliance to undercut President Barack Obama’s effort to reach a deal with Iran limiting that government’s nuclear program. But this stunt did highlight a significant aspect of the the ongoing debate over Iran—Netanyahu’s position is extreme and unworkable: Iran should yield completely, or there will be war.

The ongoing negotiations between the United States and its allies and Iran have been a tough slog. But at the heart of the issue is a simple point: Will Iran be allowed to engage in any enrichment of uranium? Iran insists it is entitled to pursue a nuclear program, if only for civilian purposes. Netanyahu contends that if Tehran retains any nuclear program, there will be a risk that it can develop nuclear weapons with which it can threaten Israel’s existence. Obama’s aim is to impose severe restrictions on Iran’s nuclear program to limit any ability to produce a nuclear bomb—and to ensure that if there were to be an Iranian breakout from an agreement that it would still take Tehran some time to make a bomb. Obama wants to minimize greatly the risk of Iran going nuclear; Netanyahu wants to eliminate the risk.

The difference between these two positions is probably war.

There is no way Iran is going to agree to a complete cessation of nuclear activities. Though sanctions have nudged Tehran to the negotiating table, greater sanctions are unlikely to persuade the mullahs to surrender fully to the nation they have called the Great Satan. Consequently, to achieve a large reduction in nuclear risk, the United States and its allies will have to allow the continuation of some nuclear activity. For Netanyahu, this is unacceptable. If his view prevails, there will be no deal. Presumably, Iran will keep on with a nuclear program. And for Netanyahu and his crowd, there will be only one option: war. That is, a military attack on Iran’s nuclear facilities and perhaps other targets. Even if the military response is limited, such an assault will have implications throughout the region. Remember, Iran is a key ally of Iraq in Baghdad’s difficult fight against ISIS. And if the past 12 years are any guide, unintended consequences are the norm when it comes to war and policy in the Middle East.

During his speech, Netanyahu tried to smother the political fire his appearance sparked. He said he “deeply” regretted that some people perceived his appearance before Congress as “political.” And he heaped praised on Obama: “Some of what the president has done for Israel might never be known…But I know it, and I will always be grateful to President Obama for this support.”

But Netanyahu’s main mission was to advance his extremist stance—and undermine Obama’s attempt to reach an agreement with Iran. He contended that Iran is bent on destroying Israel and “the Jewish people.” He devoted many words to depicting the bloody and repressive deeds of the Iranian regime at home and abroad and called on Congress to stand with him to stop Iran’s “march of conquest, subjugation, and terror.” He was basically lecturing Obama and those looking for a deal. Iran, he proclaimed, “will always be an enemy of America. Don’t be fooled.” Fooled? Netanyahu was accusing Obama of being hoodwinked by the evil and wily bargainers of Tehran. He equated Iran and ISIS, saying that each wants to impose an Islamic state on the world. The difference between the two? ISIS uses butcher’s knives and YouTube, and Iran will “soon” have nuclear arms.

Netanyahu wasn’t shy; he came to Capitol Hill to sabotage the agreement Obama is pursuing: “That deal will not prevent Iran from developing nuclear weapons; it will all but guarantee that Iran gets those weapons.” He dismissed the ability of inspectors to monitor any agreement. “Iran has proved time and time again it cannot be trusted,” he said. So, he argued, Iran could cheat its way to a nuclear bomb. But worse, he asserted, Iran could develop a bomb by sticking to the deal. This accord “doesn’t block Iran’s path to the bomb; it paves its path to the bomb.”

Netanyahu’s bottom line: This deal cannot work. So then what? Netanyahu called for tighter economic restrictions until Iran changes it aggressive behavior and terrorism-supporting ways and no longer threatens “to annihilate my country, Israel, the one and only Jewish state.” Throughout his speech, GOPers and some Democrats applauded roundly, as Netanyahu, who supported the US invasion of Iraq in 2003, insisted the alternative to the current deal is not “war” but a “much better deal.” But the deal he has in mind would require complete capitulation by Iran. And that’s not likely to occur.

Even though Netanyahu tried hard to come across as a reasonable fellow—savvily quoting Robert Frost, poignantly referring to the Holocaust—he was lobbying the United States for a course that could well lead to military confrontation. And his position is hardly the consensus view in Israel. As Avner Cohen, a historian who specializes on Israeli’s nuclear weapons program, has noted, the current deal is “reasonable” and there “is only one alternative: continued sanctions, renewed enrichment and in the end military conflict.”

Netanyahu’s speech was designed to depict Obama and others working on the current deal as utterly naive and, with Israeli elections two weeks off, to burnish Netanyahu’s credentials as a hawk who can school Obama and other American squishes on their own turf. And House Speaker John Boehner, who had invited Netanyahu to use Congress as a prop, had succeeded in firing a torpedo at the president’s Iran talks. As unseemly as all this was—Netanyahu could have delivered his Obama-subverting message in meetings with US lawmakers, media interviews, and public speeches elsewhere—the hard truth remains: Obama and Netanyahu have a fundamental difference of opinion. The president believes a realistic deal with Iran will contain Tehran’s nuclear program and reduce the odds of another war in the region. Netanyahu insists on an all-or-nothing approach that, whether he says it or not, seems likely to lead to war. This is indeed an important debate, one that should be free of all the theatrics and chest-thumping that Netanyahu, Boehner, and their political consultants engineered today.