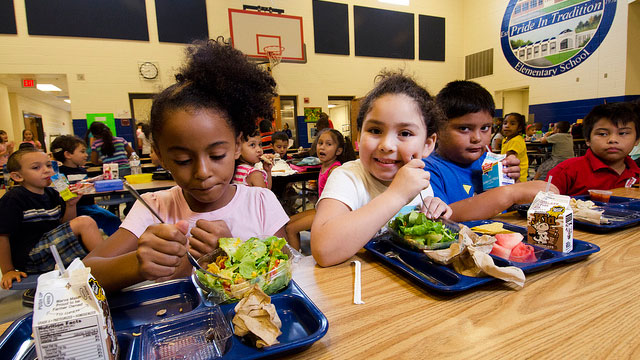 Our nation’s school cafeterias are on track to serve more whole grains and less salt—but not if one Republican senator has anything to say about it.

On Monday, Rep. John Hoeven (R-ND) announced plans to introduce a bill that would roll back 2014 legislation requiring school cafeterias to ensure that 100 percent of their grains are whole-grain rich (meaning that at least 51 percent of a given food’s grains are whole, rather than refined). In addition, the bill seeks to remove stricter sodium limits that were set to take effect in 2017.

The bill, said Hoeven, would allow schools to “serve meals that are not only well-balanced but also appealing to students.”

Rep. Hoeven has accepted tens of thousands of lobbying dollars from the food industry.

Hoeven’s comment on student “appeal” has been at the center of debate since 2010, when President Obama signed the Healthy, Hunger-Free Kids Act. Aimed at curbing the nation’s child obesity rate, it placed limits on the amounts of sugar, fat and salt being served on campuses and also ushered in mandates like the whole-grain requirement.

But opponents of the act argue that the requirements leave students with unappetizing choices that result in tons of waste. This notion was supported in a spring 2014 report from the Harvard School of Public Health, which found that nearly 75 percent of vegetables and 40 percent of fruit being served in school cafeterias were ending up in trash cans. The School Nutrition Association, which represents 55,000 food service workers, which has been vocal in its desire to scale back the current restrictions, used the report to support its argument that the new rules don’t work.

And the SNA is pleased with Hoeven’s bill. “School nutrition professionals are committed to serving healthy meals, but minor adjustments to the most extreme restrictions under the new rules will help struggling schools bring students back to the cafeteria,” School Nutrition Association president Julia Bauscher wrote in a press release in support of the new bill.

But critics have pointed out that helping “struggling schools” is not the sole agenda of the SNA—its sponsors include Domino’s Pizza, General Mills Foodservice, PepsiCo Foodservice, and Tyson Foods, Inc.—all of whom contract with school cafeterias and would benefit from less stringent nutritional regulations.

What’s more, critics note that Hoeven and the SNA’s argument about the importance of appealing to students might not hold water: A 2014 study published in the peer-reviewed journal Childhood Obesity found that kids are, in fact, pretty okay with the new healthier standards.