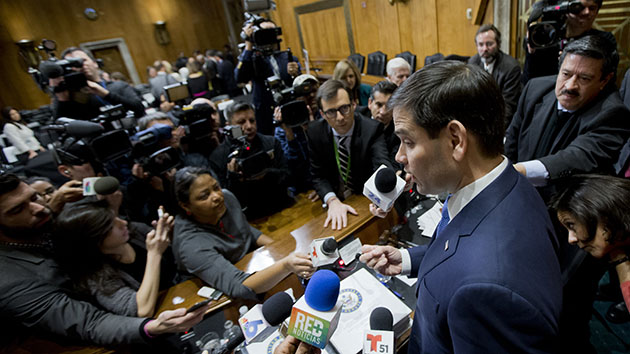 Every day seems to bring Florida Sen. Marco Rubio closer to a presidential run. In recent weeks, the first-term senator has toured the early primary states, including Iowa and New Hampshire, to promote his new, and very presidential-sounding book, American Dreams: Restoring Economic Opportunity for Everyone.

A talented orator, a Spanish speaker, and a legislator from a key swing state, Rubio could be a strong GOP contender. But his political career in the Florida State House from 2000 to 2009 dovetails with a golden age of corruption in Sunshine State politics. The FBI and the IRS descended on Florida in 2010 to investigate how Florida Republican officials and top pols, including Rubio, used their state party credit cards. He was not the worst offender. Others were criminally charged; Rubio was not. But by the time Rubio was running for the US Senate in 2010, the St. Petersburg Times noted the “sheer number of public corruption investigations under way appears unprecedented in Florida.”

During that race, Rubio’s opponents hounded him over these issues. Still, Rubio was elected. But a presidential bid would bring national scrutiny to his record in Florida. Here are some of the scandals that Rubio has survived…so far.

Improper use of party credit cards: From 2005 until when he left the state Legislature in 2009, Rubio had access to an American Express credit card paid for by the Republican Party of Florida. During his time as speaker, from 2007 to 2009, Rubio often used this card to pay for personal expenses—and some of those expenses ended up paid by the state GOP. In early 2010, when Florida newspapers began to dig into these credit card records, Rubio said he had done nothing wrong and had paid American Express around $16,000 between 2007 and 2008 to cover personal expenses that he had charged, such as $181.56 at the Museum of Natural History in New York City. Rubio also put a $10,000 charge on a party card for a family vacation at a resort in Georgia before ultimately gathering money from family members and paying American Express directly, according to The New Republic.

In 2010, reporters at the Miami Herald and the St. Petersburg Times (which has since become the Tampa Bay Times) identified thousands in personal expenses for Rubio that the Republican Party was never reimbursed for, including $68.33 for “beverages” and a “meal” from a liquor store near his West Miami home, $765 from Apple’s online store for “computer supplies,” and $1,024 in payments to a Tallahassee property manager for personal business. Since Rubio has not released his credit card records from 2005 to 2007, it’s unknown how he used the card during those years.

In 2012, when he was on the list of possible running mates for Mitt Romney, Rubio sat down for an interview with Fox News’ Bret Baier and tried to dispense with the credit card issue. Every month, Rubio explained, he would get a statement from American Express and directly pay off any personal expenses. Rubio insisted that “the Republican Party of Florida never paid my personal expenses” and that the issue was “totally resolved years ago.”

But after the interview, Beth Reinhard, one of the reporters who exposed the Rubio credit card story noted, “[Q]uestions remain about the more than $100,000 in charges from Nov. 2006 to Nov. 2008.” And she presented what she called the “obvious” question: “Why would such a savvy politician continually use a state party credit card for non-party business, requiring him to reimburse the credit card company after the bill had been paid?”

Double-billing flights: In February 2010, as he ran for the US Senate, Rubio admitted to double-billing Florida taxpayers and the Republican Party of Florida for eight flights during his time as House speaker. Rubio said the billing was a mistake and repaid $3,000 to the state GOP.

How could this have happened? Rubio blamed the snafu on his travel agency, which charged his state GOP card instead of his personal card. Then, Rubio explained, his staffers sought reimbursement from the state for those same flights.

In this case as in all others, whenever Rubio or his staff fended off questions about his finances during these times, they would chalk the issue up to “clerical errors,” according to a 2012 biography of Rubio by Washington Post reporter Manuel Roig-Franzia. This became a “stock narrative” from Rubio’s supporters, Roig-Franzia wrote, “Rubio was simply sloppy, but not corrupt.”

Political committees: During his stint in the state House, Rubio started two political committees that together took in about $600,000 over a period of less than three years and often made questionable payments. One of these was $14,000 for “couriers” that included three relatives of Rubio who were doing political work around the state.

Rubio established one of these committees, Floridians for Conservative Leadership, in December 2002, to “support state and local candidates.” But an investigation by the Miami Herald and St. Petersburg Times revealed that in 2010, the committee spent “nearly $150,000 on administrative and operating costs and $2,000 in candidate contributions.” Credit card expenses as high as $50,000 had little information about how the money was spent. The newspapers noted that this was in “contrast with the more detailed disclosures of other legislators’ political committees.” Other politicians’ committees generally gave more to candidates and had lower administrative costs.

“The bookkeeping in (that) committee was not always perfect,” Rubio’s campaign manager told told the Herald and the Times in 2010 after they discovered as part of their investigation that $34,000 in expenses, including a $7,000 reimbursement to Rubio himself, had not been disclosed, as required by state law.

The “Taj Mahal” courthouse: Among Tallahassee’s many scandals during the Rubio years was an elaborate new courthouse for the 1st District Court of Appeal located in the state’s capital. At a time when the Republicans running the state were preaching fiscal austerity, the Legislature appropriated a whopping $48 million for the new facility, which included plans for each judge to get a 60-inch flat-screen TV, mahogany-paneled chambers, and granite countertops for a private bathroom and kitchen, according to the St. Petersburg Times. Funding for the new courthouse snuck through the Legislature as an amendment to a transportation bill on the last day of the legislative session in 2007.

During his 2010 Senate bid, Rubio denied any part in funding the lavish project, saying it was “not something I worked on as speaker.” Yet, the St. Petersburg Times uncovered an email distributed among the judges on the 1st Circuit listing the “heroes” who helped fund the project. Rubio was among those who were “especially helpful” in appropriating money for the project. “The outrage may be that it was a legal waste of public money, and that powerful legislators like Marco Rubio quietly conspired to make it happen,” charged a St. Petersburg Times editorial, arguing that the odds the funding for the courthouse passed the Legislature without Rubio’s blessing were “slim to none.”

His friendship with David Rivera: For over two decades, Rubio has been close friends with David Rivera, state representative who became a member of the US Congress. They both served in the Florida state Legislature in the early 2000s, and Rubio and Rivera jointly bought a house in Tallahassee and lived there together when the Legislature was in session. The two were known as a team there, and when Rubio campaigned to become speaker of the state House—a job that takes years to secure—Rivera acted as his top strategist. Their shared house and five months of missed mortgage payments came to haunt Rubio during his Senate run in 2010 when their bank tried to foreclose on the property. Rubio and Rivera made the missing payments and kept the house.

For the past several years, Rivera has been under investigation from state and federal officials for an exhaustive list of alleged misuses of political money. For example, investigators suspected that Rivera had accepted more than $500,000 in payments from the owner of a Miami dog track for Rivera’s help on a local initiative to allow slot machines at gambling sites. State investigators, though, let Rivera off the hook in 2012 after an 18-month investigation, citing the statute of limitations and Florida’s lax campaign finance laws.

But Rivera remains under federal investigation for an elaborate campaign finance scheme and cover-up that reads like an over-the-top Hollywood script. Running for reelection to Congress in 2012, Rivera was likely to face Democratic challenger Joe Garcia, whom he had beat two years before. Federal prosecutors are investigating whether Rivera propped up a Democratic candidate running against Garcia in the primary. Rivera allegedly used his on-again-off-again girlfriend, Ana Alliegro, as a go-between to funnel more than $80,000 in cash to the other Democratic candidate, Justin Lamar Sternad. Garcia beat Sternad in the primary, and then defeated Rivera in the general election in 2012. When the feds began to look into the campaign finance scheme, Rivera helped Alliegro to escape to Nicaragua to avoid federal investigators.

Alliegro was arrested in Nicaragua nearly a year ago at the US government’s request and sent back to the United States, where she ultimately plead guilty. She has testified in depth about the entire scheme to a federal grand jury. Sternad also plead guilty for his part in the scheme in 2013. Rivera has yet to be indicted, according to the Miami Herald. Attorneys familiar with the case told the Herald that the US attorney might be waiting until his case is “iron-clad.” Or perhaps Rivera is giving testimony to implicate others. It’s anyone’s guess.

Rubio has repeatedly defended his friendship with Rivera, refusing to distance himself from his embattled chum. “He’s a friend, and I’m going to give him the benefit of the doubt,” Rubio told Fox’s Baier in 2012. If Rubio runs for president, he may get plenty of opportunities to continue this defense.