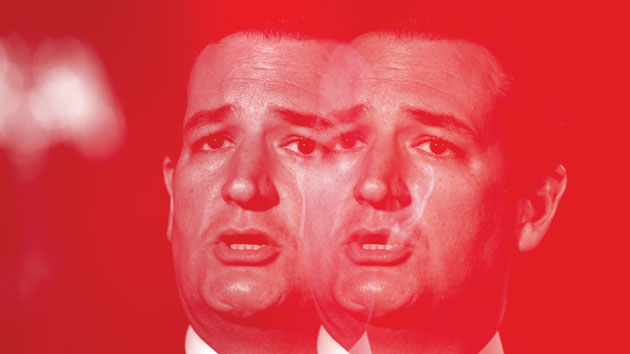 Presidential hopeful Sen. Ted Cruz (R-Texas) talks a good game as an uncompromising conservative. But before he vowed to destroy Obamacare only to admit he may use it, before he forsook rock’n’roll—back when he was a private appellate lawyer charging $695 an hour, Cruz forcefully argued positions that contradict what he now espouses. Some examples from the Ted Cruz Wayback Machine:

THEN: In 2009, he wrote a brief arguing that giving federal stimulus money to retired Texas teachers “will directly further the greater purpose of economic recovery for America.”

NOW: Obama’s economic program is “yet another rehash of the same big-government stimulus programs that have consistently failed to generate jobs.”

THEN: As a lawyer, Cruz defended a $54 million jury award to a severely disabled New Mexico man who had been raped in a group home, asserting that “a large punitive damages award is justified by the need to deter conduct that is hard to detect and often goes unpunished.”

NOW: Wants to spread Texas-style tort reform—which caps punitive damages at $750,000—to the rest of the nation.

THEN: Cruz worked on the Supreme Court case of a Louisiana man who’d been wrongfully sentenced to death, stating that prosecutorial misconduct undermined “public confidence in the criminal-justice system.”

NOW: “I trust the criminal-justice system to operate, to protect the rights of the accused, and to administer justice to violent criminals.”