In late 2013, major corporations such as Walmart, Nordstrom, Lowe’s, Macy’s, and Safeway began bankrolling the Association for Responsible Alternatives to Workers’ Compensation (ARAWC), a group that pushes legislation aimed at making it harder for workers hurt on the job to access lost wages and medical care.

But you wouldn’t know it by looking at ARAWC’s website. Sometime after Thursday, when Mother Jones published an article naming the major corporations financing ARAWC, the lobbying group removed a page from its site that listed its current members. Mother Jones recovered a version of the page that was cached earlier this month: 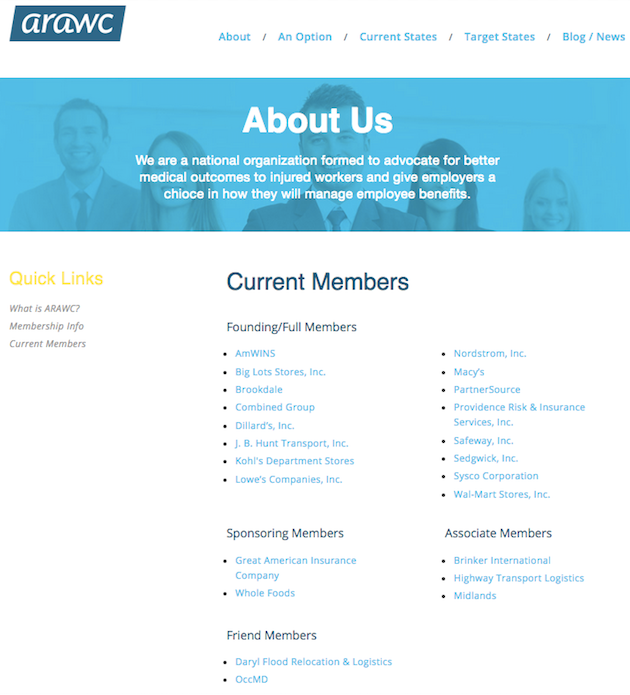 According to ARAWC’s membership application, full and founding members pay $25,000 a year to join. Sponsoring members, such as Whole Foods and the Great American Insurance Company, pay $10,000 a year.

We’ve asked a spokesman for ARAWC why the group removed its “current members” page and will update this post with any response.

Update March 30, 6:20 p.m. EDT: A spokesman for ARAWC wrote the following in an email: “The Current Members page on the ARAWC website was previously scheduled to be taken down, because it did not reflect our current membership. It is not a big issue like some are making it into. Many lobbying organizations do not list their members at all. I expect the page to be re-posted at a later date.”