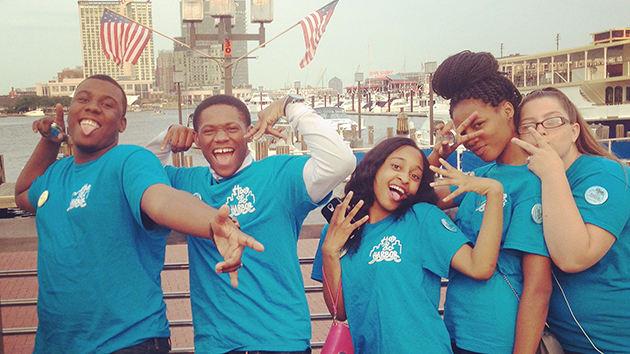 The group's "peace ambassadors"Courtesy of the Inner Harbor Project

Since protests sprang up across Baltimore in the wake of Freddie Gray’s death last week and turned increasingly violent on Monday night, cleanup crews and residents—including kids—have been working to repair the city. But long before the protests for Gray there were teens like Diamond Sampson, a Baltimore high school student who three years ago started working with a group of peers on the Inner Harbor Project, an effort to defuse tension between Baltimore’s youth and its police.

Sampson says she’s felt disheartened by the violence, but she sympathizes with the anger and frustration. Part of why the peaceful protests first spiraled out of control on Saturday, she says, is that some people walking by them shouted, “Black lives didn’t matter”—a detail that she feels the media overlooked.

Sampson was one of the first teens to be recruited by Inner Harbor Project founder Celia Neustadt, who grew up in Baltimore and was one of four white students in her own high school class. After going on to graduate from Pomona College, Neustadt returned to the city to start the initiative, with Sampson as her first recruit. Since then, dozens of Baltimore teens have joined and helped conduct “trainings” for the Baltimore Police Department’s Inner Harbor unit. They’ve often walked the harbor—a tourism destination and popular hangout for inner-city teens—as self-declared “peace ambassadors,” wearing matching blue T-shirts and watching out for trouble: If a cop and a teen start arguing, they move in to help mediate. The group now has formal partnerships with local businesses and the police.

The current unrest pains Neustadt: “I know kids who saw the protests as an opportunity to, as my kids say, ‘act a fool.’ They thought this was an opportunity to take out anger on the city without consequences. Our work is front and center right now. There are so many young people in this city with nothing to lose.”

In the days to come, the Inner Harbor Project’s members are planning to use their social networks to try to stop agitators and recruit future youth ambassadors. In conversations with friends, Sampson says there’s been talk about human rights for black teens and even a new civil rights movement. Whether or not that takes shape, she adds, “there’s something going on, greater than our generation can realize.”