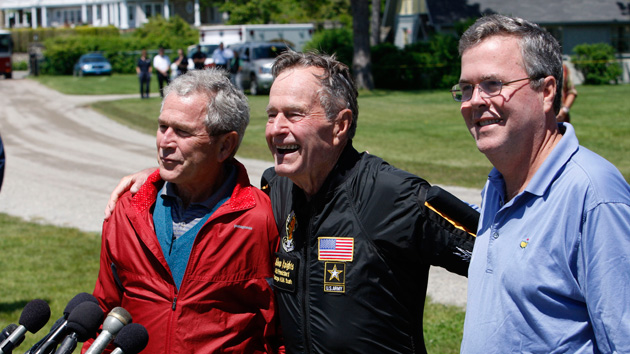 When the recent controversy about the Clinton family foundation first emerged—thanks to Clinton Cash, the book by conservative author Peter Schweizer—all-but-announced Republican presidential candidate Jeb Bush declared that Hillary Clinton is “going to be held accountable like all of us…That’s part of the process.” But Bush declined to slam Clinton or comment on Schweizer’s admittedly unproven allegations that she took official action as secretary of state to benefit foreign donors to the foundation. He said, “I don’t ‘go off’ on Hillary Clinton.” And he explained that there would be time later to get into partisan sniping. But there was perhaps another reason for his reticence: The Bush family foundations are less transparent about their donors than the Clinton Foundation.

Nonprofits are not compelled to reveal their funders, and most treat their financial sources as top-secret information. But the Clinton Foundation does release the names of all its donors and the general amount of each donation (though it has acknowledged screwing up on occasion). It first made public its contributors in late 2008 after then president-elect Barack Obama tapped Hillary Clinton to be his secretary of state. The need for openness was obvious: A foreign government, a corporation, or wealthy individuals donating to the foundation could have an interest in a decision or action made by a secretary of state. And the public had a right to know if any potential conflicts of interest were at hand. (The overlap between the foundation’s funding, the Clintons’ personal finances, Bill’s global hobnobbing with foreign leaders and CEOs, and Hillary’s official actions as secretary of state certainly deserved scrutiny.) But the foundation’s nearly 3,000-page list of contributors was not searchable, and the foundation only supplied the names of the donors, not addresses or any other identifying information. The specific amounts of contributions were not provided, only the range (say, $5 to $10 million, or more than $25 million). Still, this was much more transparency than what is practiced by most foundations. As Tom Watson recently wrote at Forbes.com, “In truth, the Clinton Foundation is among the most forthcoming of major charities and nonprofit foundations—especially those headed by public figures.”

It’s certainly more transparent than the foundations that George W. Bush and George H.W. Bush established to fund their presidential libraries and other activities. The George W. Bush Foundation raised $361.8 million between 2010 and 2013, according to its latest tax filing. But it does not have a policy of full disclosure for its donors. According to Hannah Abney, the communications director for the George W. Bush Presidential Center, the names of the foundation’s major donors are etched into three “donor walls” in the Dallas-based Bush Center at Southern Methodist University, and the “Freedom Registry,” located at the entrance to the George W. Bush museum and library, lists donors who have contributed more than $20. No specific donation amounts are noted, and there’s a catch: Any donor who wishes to remain anonymous is not named. Moreover, the only way to see the list of nonanonymous donors is to visit the actual museum and look at the walls and the registry. The George W. Bush Foundation does not make its list available in any other form or in any other place.

In an email, Abney noted that some donors could be identified by perusing newspaper articles, and she sent a link to a 2013 Dallas Morning News story that reported on a handful of donors to the foundation, including casino mogul Sheldon Adelson, Rupert Murdoch’s News Corporation, the United Arab Emirates, and Kuwait, which each have particular agendas. This article, though, was hardly a complete list.

The George Bush Presidential Library Foundation, which was set up in 1991 to fund the museum and library for former President George H.W. Bush at Texas A&M University, raises less than $3 million a year these days and, as of 2013, had $47 million in assets. Its website provides no information regarding donors, and Kristin King, the foundation’s director of communications, did not respond to repeated calls and emails requesting information about its donor disclosure policies. An internet search turned up no instances of this foundation releasing the names of its backers.

The Clinton Foundation may well be in a different position than the Bush foundations, given that it has received large donations from governments, corporations, and billionaires with agendas while Hillary Clinton was a Cabinet official or a presidential candidate. But the foundation funding George H.W. Bush’s library and museum was accepting donations during his son’s presidency—when some contributors, no doubt, had a powerful interest in decisions rendered by the Bush administration. And the foundation that support’s George W. Bush’s library and center is pocketing tens of millions of dollars a year, while W’s brother is seeking to become the third Bush to win the White House. Anyone who wanted to gain favor with the Bush clan while George W. Bush was president could have anonymously donated an unlimited amount of money to his father’s foundation, and now that Jeb Bush is in the hunt, anyone looking to fashion a relationship with the Bushes can contribute millions to either of these Bush foundations and keep that connection a secret.

With the Clinton Foundation accepting large checks from powerful players around the world, the Clintons have cooked up a situation that is rife with possible conflicts of interest. At least, it’s been easy for critics to point to potential problems. And they can do that partly because the foundation has a policy of disclosing all donors and posts their names on its website. (It lists nearly 300,000 contributors who gave less than $250.) The Bush foundations don’t go that far—and that may be fortunate for Jeb Bush.