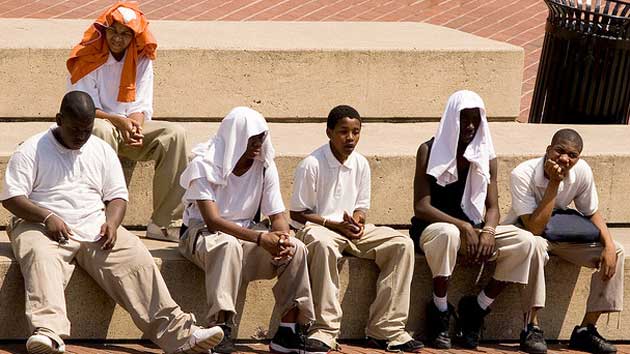 Many of the protesters venting their frustrations over the April 12 death of Freddie Gray, a 25-year-old black man who sustained fatal injuries while in Baltimore police custody, are equally fed up with the systemic failures that keep African Americans marginalized in Baltimore and elsewhere.

Consider the city’s public schools. President Barack Obama, Hillary Clinton, and even Orioles execs have spoken out about inequality in Baltimore, touching on problematic trends in the neighborhood schools Gray and his peers attended. And while we don’t know much about Gray’s time in high school (apart from the fact he played football), we were able to dig up some facts about his alma mater, Carver Vocational-Technical High School, and some of the other schools around the Mondawmin Mall, where rioting first broke out.

Gray had been out of school for years by the time he died, but the realities of his school system likely played a role in his trajectory. So says Georgetown University sociologist Peter J. Cookson, whose book Class Rules: Exposing Inequality in America’s High Schools posits that schools are instrumental in the institutionalization of racism and class stratification. Cookson points out that, while physical segregation plays a role, there are other factors at play, including disparities in the safety of buildings, extracurricular and support activities, quality of curriculum, funding (earlier this month Gov. Larry Hogan suggested cutting $35.6 million in funding to Baltimore City Public Schools), and the ability of schools to recruit and retain good teachers.

Dare we forget last fall’s viral video of a high-school teacher slamming a student into a row of lockers and saying, “I’ll kill you in here!” Yep, you probably know what’s coming: It was Carver High.

This post has been updated to include charter school stats as well.

Correction: A previous version of this story misidentified the numerical score of a perfect SAT.