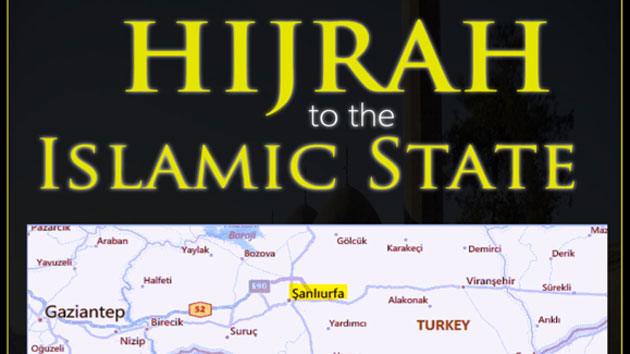 The cover of Hijrah to the Islamic State, a travel guide for Western ISIS recruits

With many Western jihadists setting out to join ISIS in Syria and Iraq, supporters of the self-proclaimed Islamic State has released a ludicrously banal, English-language travel guide to prepare wannabes for the trip ahead. Titled Hijrah to the Islamic State, the 50-page e-book reads like a Lonely Planet for would-be recruits, with advice on everything from how many changes of clothes to a reminder that you shouldn’t embark on air travel while carrying explosives. (Hijra means “migration” or “journey” in Arabic.)

“People who leave to get to Syria do not tell anyone, not even family. Travellers [sic] to Syria usually want to reach Turkey,” the guide begins. “But for safety reasons, they buy a ticket for an indirect holiday country like Spain or Greece so their destination doesn’t seem suspicious.” It goes on to detail how to circumvent official suspicion while traveling: Buy a two-way airline ticket even though there’s no intention to use it. Travel by bus or ferry to reach Turkey to avoid scrutiny at airports. Be prepared to mention popular tourist sites to nosy officials. “This is important,” because “if they question you, you can just brandish this in front of their noses and show them how serious of a tourist you are.”

The guide provides a link to a CIA manual uncovered by Wikileaks on how its operatives get through airport security. It also suggests that recruits “be chill to the airport officers.” And just in case it isn’t obvious, readers are instructed to not tell Turkish authorities that they intend to commit jihad in Syria. (See the doctored Turkish visa application below.) 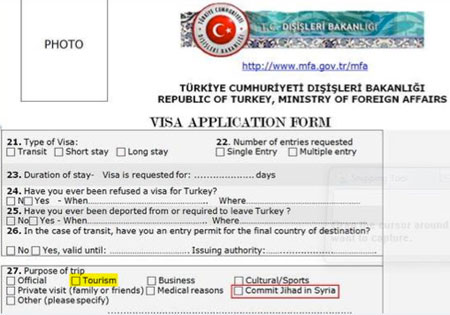 A doctored Turkish visa application is included in the guide as a joke.

Before any of that, though, recruits need a contact within ISIS. The guide advises on how to find one via Twitter, even as the social media platform continues to delete IS-linked accounts. ISIS contacts may help provide protection and safehouses, and will help travelers cross the border into Syria. According to the guide, a common tactic was for recruits to dress in non-religious garb and hope that border agents would allow them to pass; but now there’s an “updated method”: “Look around, and if the coast is clear…run as fast as [you] can into Syria.” On this point, the guide suggests, “Wear your most comfortable sneakers ever.”

“Wear your most comfortable sneakers ever.”

From the border, a nearly 80-mile overland journey to the capital of the caliphate follows. Once there, “take a breath of fresh air, ’cause that’s how shari?’ah feels like…LoL you will probably be out of breath and panting, but I’ll allow you,” the author jokes.

Now, on to the necessities: ISIS suggests one suitcase, a tough backpack, and a fanny pack. In case the suitcase is lost or stolen (“mind you, it happens”), pack at least one change of clean clothes, perhaps two. If that’s not possible, “at least pack some clean underwear.” A sleeping bag is useful while waging jihad  because “you might have to sleep in uncommon places at odd hours and a bed or mattress will not always be available.” Recommended toiletries include a toothbrush, toothpaste, “and stuff.” Also recommended: knee pads (“there is much crawling you will have to do here”), running shoes, lots of socks, a headlamp, and a warm but lightweight jacket. Weapons should be left at home, though sneaking in a good knife may be worth the risk. Most available knives in Syria suck, according to the guide.

Plug adapters, an MP3 player (for listening to lectures and the Quran, of course. Not music!), and a tablet are suggested. The guide strongly advises bringing a solar charger because it’s not cool to mess with the environment. As one @Abdul_Aliy_4 writes in the how-to: “[T]here’s an abundance of sun and solar energy which goes to waste. Also, using solar energy is ecological and gives you a certain amount of ‘independence’. No doubt this will also bring you more ajr [rewards] and hasana?t [good deeds] since you will be minimising wastage and polluting less. Wastage is not of the di?n [faithfull]. It doesn’t mean that because you’re making hijra, you can now start dirtying the Earth which belongs to Allah.”

While the guide is full of insinuated winks and and attempts at jihadist humor, it has serious implications. Around the same time of its release last month, three London schoolgirls flew to Turkey to join the militant group in Syria and are currently believed to be in Raqqa. Five more girls from the same town were barred from traveling after expressing an interest in going to Syria. The FBI has stopped more than two dozen American jihadist hopefuls before they could board flights, but several have made the trip, including Moner Mohammad Abusalha, the first American to become a suicide bomber in Syria after fighting alongside the Al Qaeda-allied Jabhat al-Nusra.

Authorities fear that the travel guide, which includes testimonies from foreign fighters, will lead to even more Western recruits trying to fight in Syria. Scotland Yard has reportedly (and unsuccessfully) attempted to remove it from the internet. (I found a copy on a document-sharing site.) Hopeful jihadists continue to benefit from the guide’s crucial, if banal, travel advice, like this reminder to make sure they keep “vitals” accessible: “By this, I mean that if you would need to take something out of it, you wouldn’t have have to do a contortionist’s pose to reach whatever you’re looking for.”