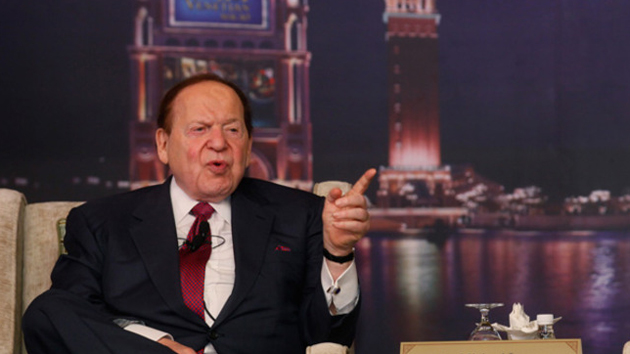 For years, Republicans who aspire to the presidency have sought the support of Sheldon Adelson, the billionaire casino magnate and GOP mega-donor. Adelson spent $150 million backing Republicans during the 2012 election cycle, and the candidate who secures his support this time around will get a big boost in a crowded GOP field. Sen. Marco Rubio (R-Fla.), who announced his campaign on Monday, already has one billionaire backer—Norman Braman, a Miami car dealer. But Rubio also seems to have impressed Adelson himself.

Israel-watchers on Twitter have pointed out that Israel Hayom, the daily newspaper owned by Adelson, has been particularly interested in the junior senator from Florida.

Third morning in a row Marco Rubio has been on the cover of Israel HaYom. He seems to be winning the Adelson primary. http://t.co/KwxkrpPRaH

Full-page in Yisrael Hayom pitting Rubio vs Clinton. No mention of other GOP candidates. “Adelson primary” is over. pic.twitter.com/xcjXQLThIL

The fourth day in a row that Rubio has been featured in Yisrael Hayom, Israel’s Sheldon Adelson-owned paper. Hmmm. https://t.co/NT8OzijFPA

It’s too early to call the Adelson primary for Rubio. As in the past, Adelson will want each of the major candidates to court him; the casino magnate is known to be fond of Sen. Lindsey Graham (R-S.C.) and Gov. Chris Christie (R-N.J.), both of whom are seriously considering runs. But Rubio—who dined one-on-one with Adelson last month—is off to a good start.