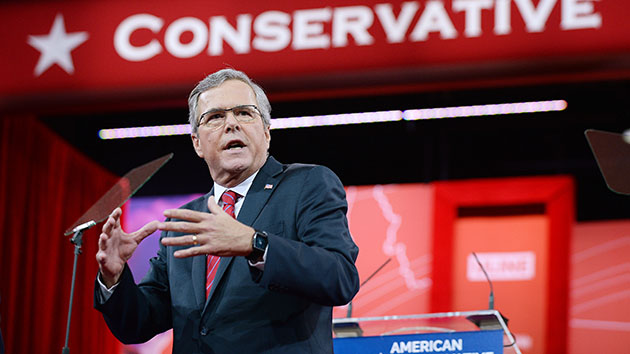 As Marco Rubio and Jeb Bush, once political pals, now compete for the Republican presidential nomination, one battle they will be waging with each other will be who has better neoconservative bragging rights. Both have recruited prominent policy wonks from the hawkish wing of the GOP, and they may be heading to a showdown over who gains more support from this influential cadre. (Should he enter the 2016 race, Republican candidate Lindsey Graham will take a stab at winning over this group too.)

Ever since Rubio entered the Senate in 2011, he has made a strong play for the neocons. He has reached out to some of the George W. Bush administration’s most hawkish alumni for advice on foreign policy, and he has made national security a centerpiece of his campaign. The Rubio Doctrine, which he outlined in his first major foreign policy address as a candidate on Wednesday, comes straight out of the neocon playbook, calling for a robust military and aggressive approach to intervention.

But Rubio may find that out-neoconing Jeb Bush won’t be so easy. Bush, too, has assembled a foreign policy team almost entirely made up of former George W. Bush administration officials—including Paul Wolfowitz, a key architect of the Iraq War who for years peddled a conspiracy theory favored by neocons that held that Saddam Hussein, not Al Qaeda, was the main sponsor of anti-US terrorism. And Bush’s ties to the neoconservative movement date back to the mid-1990s, when he became affiliated with the Project for a New American Century (PNAC), a foreign policy think tank established by leading neocons and hawks.

In 1997, Bush was a Miami businessman and failed gubernatorial candidate without foreign policy experience, and his older brother was the governor of Texas. That June, as Jeb geared up for a second campaign for governor, he joined 24 neoconservatives in signing PNAC’s founding document, which fiercely called for “a Reaganite policy of military strength and moral clarity” in the post-Cold War era. Several of the original signatories, including Wolfowitz, Dick Cheney, Donald Rumsfeld, and John Bolton, would soon become top officials in the Bush administration and cheerleaders for the Iraq War.

The 25 signatories of PNAC’s June 3, 1997 statement of principles

That Bush was present at the creation of PNAC has been little reported. But after initially joining the group, he missed out on one of its defining moments. In 1998, PNAC issued a public letter to President Bill Clinton calling for the ouster of Saddam. Critics have pointed to this letter as the beginning of the neocon campaign to remove Saddam from power that was ultimately carried out by George W. Bush. That letter had 18 signers, but Jeb Bush was not one of them. After 9/11, PNAC continued to push ferociously for the Iraq invasion, but Jeb Bush, who had been elected governor of Florida in 1998, had no noticeable public involvement with the group at that time. PNAC dissolved in 2006.

So Jeb Bush’s links to the neocons at least go back longer than Rubio’s. But in the past few days, Bush has screwed up a key point: talking about the neocon-promoted Iraq War. When Fox News host Megyn Kelly asked Bush in an interview whether he would have “authorized the invasion” of Iraq “knowing what we know now,” Bush answered yes. On Tuesday, Bush walked those comments back, telling Sean Hannity he had misunderstood the question. “I was talking about, given what people knew then.” By Wednesday, at an event in Nevada, Bush was trying to brush aside questions about Iraq, calling them “hypotheticals” that do “a lot of disservice for a lot of people who sacrificed a lot.” Finally, on Thursday, Bush completed his 180-degree turn from his original comments. “If we’re all supposed to answer hypothetical questions,” Bush said in an angry-sounding tone at a Tempe, Arizona event, “I would not have engaged. I would not have gone into Iraq.”

Even if Bush nails down an answer to the pesky Iraq question, his brother’s foreign policy record will likely continue to haunt him. At the Wednesday event in Nevada, he got into a heated back-and-forth with a college student who told Bush that “your brother created ISIS.”

Rubio, a Jeb Bush protégé-turned-rival, handled the Iraq War question more deftly—after Bush had bungled it. During an interview, in which he was asked whether he would have authorized the war knowing what is now known, Rubio remarked, “Not only would I not have been in favor of it—President Bush would not have been in favor of it.” That part about Bush is debatable, but Rubio made sure to note that the hawks and neocons had reason to be worried about Saddam and WMD at the time.

So the neocon crew might be wondering this week if Rubio is a more reliable champion for their cause. And he certainly seems to be trying harder to be the neocon candidate. After all, he has adopted the neocon’s tagline. His website asks supporters to “Join Marco’s Fight For A New American Century!” And imitation is the sincerest form of flattery.