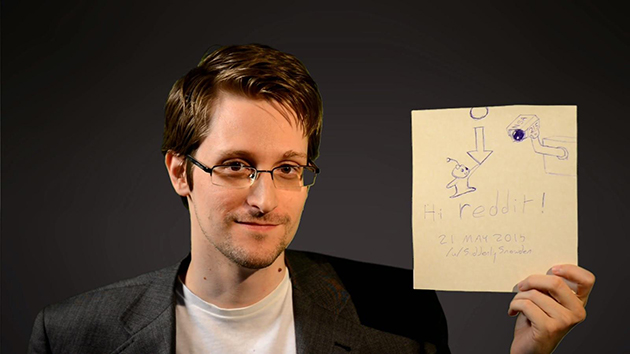 In the midst of the Congressional debate about mass surveillance and a Senate filibuster of a vote on the Patriot Act, it might be easy to forget how we got here. Arguably, none of would be happening if not for Edward Snowden, the erstwhile National Security Agency contractor who rocked the world when he leaked a trove of documents exposing the US government’s spying and surveillance operations.

Snowden took questions on Reddit during an AMA (“Ask Me Anything”) on Thursday. The whole thing is worth a read, but here are some highlights:

On Sen. Rand Paul’s filibuster of the Patriot Act’s renewal:

It represents a sea change from a few years ago, when intrusive new surveillance laws were passed without any kind of meaningful opposition or debate. Whatever you think about Rand Paul or his politics, it’s important to remember that when he took the floor to say “No” to any length of reauthorization of the Patriot Act, he was speaking for the majority of Americans — more than 60% of whom want to see this kind of mass surveillance reformed or ended.

On the American public’s apparent apathy about the NSA snooping revelations:

Jameel probably has a better answer, but we know from very recent, non-partisan polling that Americans (and everyone else around the world) care tremendously about mass surveillance.

The more central question, from my perspective, is “why don’t lawmakers seem to care?” After all, the entire reason they are in office in our system is to represent our views. The recent Princeton Study on politicians’ responsiveness to the policy preferences of different sections of society gives some indication of where things might be going wrong:

Out of all groups expressing a policy preference within society, the views of the public at large are given the very least weight, whereas those of economic elites (think bankers, lobbyists, and the people on the Board of Directors at defense contracting companies) exercise more than ten times as much influence on what laws get passed — and what laws don’t.

On why people should care:

Some might say “I don’t care if they violate my privacy; I’ve got nothing to hide.” Help them understand that they are misunderstanding the fundamental nature of human rights. Nobody needs to justify why they “need” a right: the burden of justification falls on the one seeking to infringe upon the right. But even if they did, you can’t give away the rights of others because they’re not useful to you. More simply, the majority cannot vote away the natural rights of the minority.

A free press benefits more than just those who read the paper.

On what people should do if they want to push for reforms:

The first thing is to correct misinformation whenever you see this topic being debated. For example:

Supporters of mass surveillance say it keeps us safe. The problem is that that’s an allegation, not a fact, and there’s no evidence at all to support the claim. In fact, a White House review with unrestricted access to classified information found that not only is mass surveillance illegal, it has never made a concrete difference in even one terrorism investigation.

Some claim the Senate should keep Section 215 of the Patriot Act (which will be voted on in two days) because we need “more time for debate,” but even in the US, the public has already decided: 60% oppose reauthorization. This unconstitutional mass surveillance program was revealed in June 2013 and has been struck down by courts twice since then. If two years and two courts aren’t enough to satisfy them, what is?

A few try to say that Section 215 is legal. It’s not. Help them understand.

The bottom line is we need people everywhere — in the US, outside the US, and especially within their own communities — to push back and challenge anybody defending these programs. More than anything, we need to ordinary people to make it clear that a vote in favor of the extension or reauthorization of mass surveillance authorities is a vote in favor of a program that is illegal, ineffective, and illiberal.

On whether kids should pursue careers in cryptography:

On the potential of coming back to the states one day (the questioner said, “I hope so!”):

Me too. The White House has been working on that petition for a couple years, now, and the courts have finally confirmed that the 2013 revelations revealed unlawful activity on the part of the government. Maybe they’ll surprise us.

On whether he actually saw John Oliver’s penis:

On what he misses about the United States, and specifically, if he misses pizza:

This guy gets it.

Russia has Papa John’s. For real.

(follow up): What are your favorite toppings? I like Pepperoni, Bacon, and Tomato, but my go-to Papa John’s order is Pepperoni and Pineapple with extra sauce.