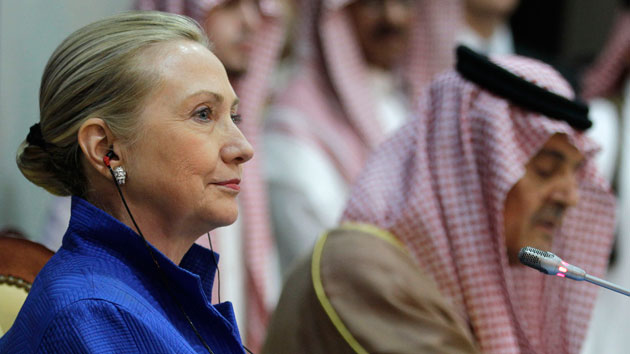 In 2011, the State Department cleared an enormous arms deal: Led by Boeing, a consortium of American defense contractors would deliver $29 billion worth of advanced fighter jets to Saudi Arabia, despite concerns over the kingdom’s troublesome human rights record. In the years before Hillary Clinton became secretary of state, Saudi Arabia had contributed $10 million to the Clinton Foundation, and just two months before the jet deal was finalized, Boeing donated $900,000 to the Clinton Foundation, according to an International Business Times investigation released Tuesday.

The Saudi transaction is just one example of nations and companies that had donated to the Clinton Foundation seeing an increase in arms deals while Hillary Clinton oversaw the State Department. IBT found that between October 2010 and September 2012, State approved $165 billion in commercial arms sales to 20 nations that had donated to the foundation, plus another $151 billion worth of Pentagon-brokered arms deals to 16 of those countries—a 143 percent increase over the same time frame under the Bush Administration. The sales boosted the military power of authoritarian regimes such as Qatar, Algeria, Kuwait, the United Arab Emirates, and Oman, which, like Saudi Arabia, had been criticized by the department for human rights abuses.

From the IBT investigation:

As secretary of state, Hillary Clinton also accused some of these countries of failing to marshal a serious and sustained campaign to confront terrorism. In a December 2009 State Department cable published by Wikileaks, Clinton complained of “an ongoing challenge to persuade Saudi officials to treat terrorist financing emanating from Saudi Arabia as a strategic priority.” She declared that “Qatar’s overall level of CT cooperation with the U.S. is considered the worst in the region.” She said the Kuwaiti government was “less inclined to take action against Kuwait-based financiers and facilitators plotting attacks.” She noted that “UAE-based donors have provided financial support to a variety of terrorist groups.” All of these countries donated to the Clinton Foundation and received increased weapons export authorizations from the Clinton-run State Department…

The following tables created by the International Business Times show the flow of money and arms deals involving 20 nations, the Clinton Foundation, and the State Department: