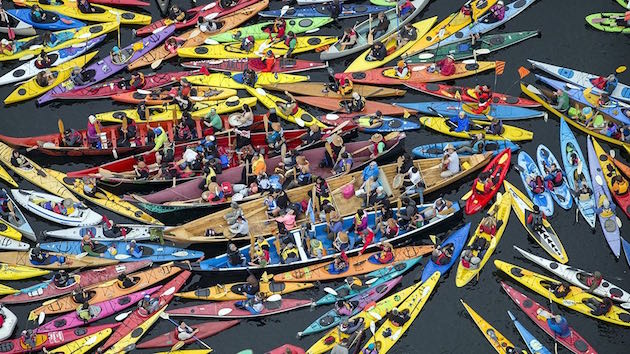 This article is being updated as news breaks. See below for the latest.

Seattleites took a dramatic stand, er paddle, against Arctic oil drilling on Saturday afternoon. Against the backdrop of the Pacific Northwest city’s skyline, around 200 activists, local Native Americans, and concerned citizens took to kayak and canoe and surrounded a giant, Arctic-bound Royal Dutch Shell oil drilling rig currently making a layover in the Port of Seattle.

Despite the oil giant’s rocky history in the Arctic region, last Monday the Obama administration conditionally approved Shell’s summer plans to drill for oil in the Chukchi Sea, north of Alaska. Environmentalists are not happy, and neither are many in Seattle, whose port has become a home base for the two Shell oil rigs’ operations. The Port of Seattle’s commissioners took heat for their controversial decision to lease one of its piers to Shell, tying the progressive city to fossil fuel extraction and the potential for environmental catastrophe in the Arctic.

As the first of the towering oil rigs arrived in Elliott Bay late last week, a group of “activists, artists, and noisemakers” calling themselves ShellNo organized a series of protests to welcome the oil company. The “Paddle in Seattle” yesterday drew an impressive flotilla of kayaks, canoes, and boats into the Duwamish River, which feeds into the Elliott Bay, to surround the Coast-Guard-protected rig. Below is a roundup of Tweeted pictures taken by people on the scene:

Tribal canoes are intermixed with the kayakers and other boats participating in the #paddleinseattle pic.twitter.com/mQYp1M94Te

Today, “ShellNo” continued its protest of Shell’s plans to drill for oil in the arctic by blocking the entrances to the Port of Seattle’s Pier 5 where one of the oil company’s rigs is docked. Hundreds gathered earlier this morning at the pier’s main entrance to slow operations on the rig, although some rig workers were apparently able to get in through other entrances. Police did not interfere with the demonstration, and at about 1:30PM the group began to leave the pier and march back the way they came. Those present included Native American activists and Seattle City Council member Kshama Sawant. Some pictures of the event:

Mohawk Kuzma is among the #BlackLivesMatter, Filipino and indigenous activists leading this march. #ShellNo pic.twitter.com/8tGx7GgNTT

Who said blockades need to be boring? We’ve got amazing speakers and musicians keeping the crowd pumped. #ShellNo pic.twitter.com/rvb6DAUDk6

With elected leadership having failed us, we launch a movement of non-violent civil disobedience to say #ShellNo! https://t.co/ZkCgfpe4Te

The scene at the Port of Seattle’s Terminal 5. #ShellNo pic.twitter.com/g126LCaVEY

Protestors at Terminal 5 have decided to end #Shellno protest and march back to morning starting point pic.twitter.com/uSKZk6Vpa0