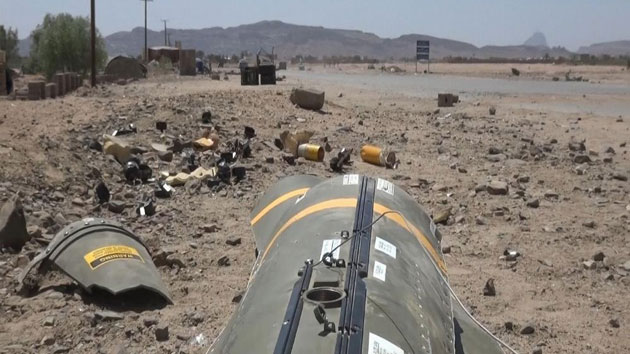 Remnants of an air-dropped cluster bomb and unexploded bomblets found in Yemen on May 23, 2015.Human Rights Watch/Basset al-Sharafi

On April 29, three adults and a child came across some fist-sized canisters on the ground outside of Baqim, a Yemeni town controlled by Houthi rebels. To the 10-year-old boy among them, they “looked like toys.” Out of curiosity, they picked up the cannisters, which then exploded. All four were injured; a nurse told Human Rights Watch that the child was wounded in the stomach, and one of the adults received injuries to his face, torso, thigh, and crotch. Considering the kind of damage that cluster-bomb submunitions can cause, they’re lucky to still be alive.

Fighter jets from the Saudi Arabia-led coalition have been carrying out strikes against Houthi rebels since late March, when Yemeni President Abdu Rabu Mansour Hadi fled the country. Now, according to two recent Human Rights Watch investigations, they are also using cluster munitions, some supplied by the United States. The first HRW report was published on the heels of mounting concern over the growing toll of civilian casualties from the air campaign—more than 1,800 people have been killed as of late May; at least 135 of them were children. The second report found evidence that US-supplied cluster munitions deployed near populated areas are harming civilians.

Here’s a look at why American cluster bombs, which have been banned by more than 100 countries, are being used in Yemen.

How cluster bombs work: Cluster bombs can be dropped from aircraft or fired from rockets, mortars, and artillery. When they open in mid-air, as many as several hundred submunitions, or bomblets, spread out over a wide area and explode. While the weapons are designed to target military installations and convoys, anyone nearby can be struck. Bomblets that fail to detonate or self-destruct can become de facto land mines. Bombs like those found in Baquim, explains Megan Burke, director of the Cluster Munition Coalition “remain on the ground until someone or something comes along and triggers that explosion.”

Why they’ve been banned: Cluster munitions were first deployed in 1943, when Soviet forces dropped them on German tanks. Due to the danger they pose to noncombatants, they were banned by the Convention on Cluster Munitions, a 2008 treaty signed by 116 nations. Tens of thousands of civilians—a third of them children—have been maimed or killed after encountering the unexploded ordnances in Afghanistan, Cambodia, Kosovo, Iraq, and beyond. 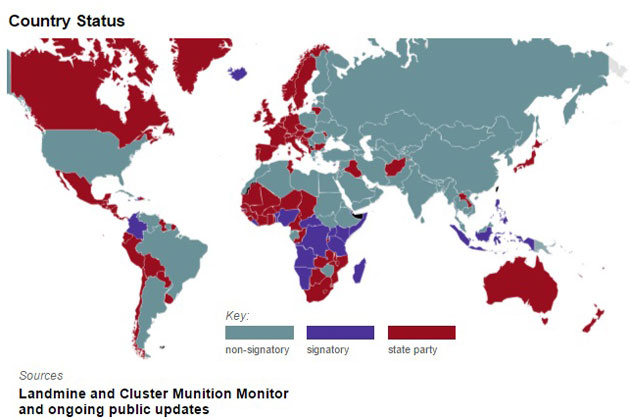 Why has the United States not signed on to the ban? The United States is one of more than 80 countries that have not signed the ban, including China, Israel, Iran, North Korea, Russia, and Saudi Arabia. In fact, “the US did not participate in the negotiations at all,” says Steve Goose, the director of the arms division at Human Rights Watch. “But they were extremely present through their proxies. We know mostly from Wikileaks that the US was putting a lot of pressure on allies not to participate in the process at all, and if they did participate, to reject the notion of a ban.” Then-Defense Secretary Robert M. Gates stated that eliminating cluster munitions from US stockpiles “would put the lives of our soldiers and those of our coalition partners at risk.”

Which US cluster bombs are being using in Yemen? Of the three types of cluster munitions identified recently in Yemen, two were manufactured in the United States and supplied by the US government. The notorious BLU-97, dubbed “Yellow Killers” for their high failure rate, were supplied to Saudi Arabia in the early ’90s and have been dropped by Saudi-led forces in Yemen’s Saada Province. The other type is the CBU-105 Sensor Fuzed Weapon, manufactured by Textron Systems Corporation. The CBU-105’s 10 submunitions each contain four “skeets.” “Those are the things that actually go boom,” says Goose. In 2013, Textron landed a controversial $641 million contract to produce 1,300 of the cluster bombs for Saudi Arabia. While the CBU-105 is banned under the Convention on Cluster Munitions, US law allows its export.

A “safer” cluster bomb? After the 2008 treaty, the United States came up with a policy that would end its use and export of cluster munitions by 2018—with the exception of those that blow up 99 percent of the time when they’re deployed. In lab settings, Textron’s CBU-105s perform to that standard, and they were hailed as a step forward for making safer cluster munitions. But since they were first used during the 2003 invasion of Iraq, activists have reported finding more duds than allowed under the one-percent failure rate rule.

The recent HRW reports also call the CBU-105’s performance into question. “What we’re seeing in Yemen is that they’re having trouble meeting this one percent criteria,” says Goose. “We have a photo with one of the canisters sitting on the ground with four skeets just sitting there. They never deployed. According to Textron, that could never happen.” Textron did not respond to requests for comment. Last week, during the closed-door UN Security Council briefing on Yemen, sources say that five countries voiced concern over the use of cluster munitions in Yemen. Asked whether the Defense Department has responded to the most recent HRW report, Belkis Wille, HRW’s Yemen and Kuwait researcher, said, “They’re interested in meeting with us.”

What has been the impact of cluster bombs in Yemen? By law, the US government can can only sell or supply cluster munitions with a one percent failure rate, and they are to be used only on specific military targets where civilians are not present. But HRW found that the Saudi cluster munitions attacks in Yemen occurred near populated areas, such as the village of al-Amar on its busy market day. Abdulbaset al-Qaidi, a Yemeni journalist based in Sanaa, says that “the coalition’s air force is targeting military sites in a very precise way, but the fact is that these sites are close to inhabited districts, and [it is] causing damage.” As Burke of the Cluster Munition Coalition notes, “Once you give a weapon to another country, you lose control over how they’re going to use it.”