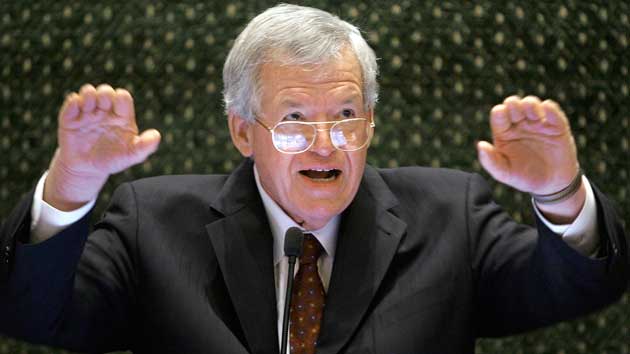 Former House speaker Dennis Hastert is now under indictment for lying to the FBI and embroiled in a major sex abuse scandal. The allegations of Hastert’s sexual misconduct—and his alleged efforts to cover up his misdeeds by paying off the victim—are shocking on their own. But what’s also so remarkable about the case is that Hastert, who spent 20 years in Congress, got caught in the first place, given how many easy, creative, and legal methods exist for buying someone’s silence without leaving a paper trail.

According to the indictment, Hastert aroused suspicion by making a series of $50,000 cash withdrawals from his bank, which was required to report any cash transaction over $10,000 to the Treasury Department. After the bank questioned Hastert about those withdrawals, he began taking out unusual amounts of cash that were just shy of the $10,000 reporting threshold—a red flag to bankers, who reported him to the feds. The cash was allegedly part of $3.5 million in hush money that Hastert, a onetime high school wrestling coach, had agreed to pay a former student to keep quiet about allegations of sexual abuse. Paying off Individual A—as the recipient of Hastert’s payments was identified in the indictment—would have been perfectly legal had Hastert not violated banking regulations by structuring his withdrawals to conceal their purpose. He then compounded his offense by lying to FBI agents who questioned him about the withdrawals. (The New York Times reported on Saturday that shortly before Hastert allegedly began paying Individual A, he inquired about setting up an annuity that would “generate a substantial” annual payout.)

Had Hastert chosen a different method to pay off his alleged victim, America’s longest-serving GOP *House speaker might not be facing criminal charges. (The allegations of sexual abuse now starting to surface aren’t likely to result in criminal charges because they’re so old; the statute of limitations is likely expired.) What’s surprising is that Hastert—a seasoned Washington operator and, until he resigned last week, a Dickstein Shapiro lobbyist—apparently overlooked some of the simplest ways of paying off somebody.

Here are just a few:

Buy a Picasso: Art can be paid for in cash, and there are virtually no reporting requirements for the purchase or resale of pricey paintings—one reason the art world is now a major venue for money laundering. Gifting a piece of artwork to Individual A would likely have attracted no notice from law enforcement. Individual A could have sold this artwork and made a tidy profit with no one the wiser. Of course, Hastert was seemingly trying to leave no trace, so he might need an intermediary to buy the artwork, which brings us to strategy No. 2.

Use a shell corporation: Hastert, according to the indictment, failed to utilize the most obvious go-to vehicle for moving money around without a paper trail: the good old-fashioned shell corporation. For a few hundred bucks—payable online with a prepaid credit card to keep things truly anonymous—anyone can be the proud owner of shell corporation in one of handful of domestic tax havens, such as Delaware, Alaska, or Wyoming, or even offshore in Belize or London. Once the company is created, a host of possibilities are available for secretly transmitting assets. Hastert could have paid Individual A directly from a shell corp. Or he could have used it to orchestrate more complex transactions involving the transfer of real estate, artwork, or even gold bullion. If Hastert wanted to be extra careful about disguising his fingerprints, he could have created a daisy chain of multiple shell corporations, all perfectly legal.

Charge it! One time-tested strategy of American tax dodgers might have worked well for Hastert in this case: investing in a private offshore investment account (think the type of Cayman Islands-based Bain Capital funds where Mitt Romney has stashed some of his fortune). Once his money was deposited there, Hastert could have simply given Individual A a credit card linked to the account to access the money in the United States.

Write a check: As Jeffrey Toobin noted in the New Yorker this week, if Hastert had simply written Individual A a check for $3.5 million, he wouldn’t be immersed in a scandal right now. It’s not a crime to give another person money, though there are some tax implications. A $3.5 million check wouldn’t have been reported to the feds. But Hastert’s behavior suggests he desperately wanted to avoid leaving any kind of paper trail. A check directly to Individual A would have been a potential smoking gun. In that case, he could have written his check to one of the many top lawyers who specialize in making their client’s problems go away via discreet (and totally legal) financial settlements—deals that are inevitably coupled with strict confidentiality agreements.

Instead, Hastert’s seemingly amateurish attempts to cover his tracks have exposed the shocking charges that he was allegedly trying to suppress.