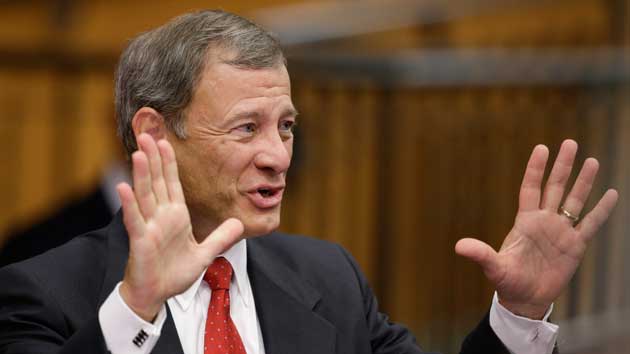 The members of Congress may occasionally be sloppy boobs, but we must defer to them when their intent is clear. That’s the main message of the Supreme Court decision handed down this morning that protects Obamacare. The issue at hand was whether what was essentially a typo—a poorly worded sentence in the law—could be used to deny health care insurance subsidies to millions of Americans in states where the federal government (not the state government) set up an exchange in which consumers can purchase insurance. Writing for the majority in the 6-3 decision, Chief Justice John Roberts told the conservative plaintiffs who had tried to exploit a drafting error (which mentioned only exchanges created by states and not the federal government) to get out of town.

The majority opinion is mostly dry, with Roberts devoting much attention to justifying the court’s decision to consider the full intent of the law and not just the meaning of a few words in a single sentence. Here are some of the best passages:

1. When analyzing an agency’s interpretation of a statute, we often apply the two-step framework announced in Chevron, 467 U. S. 837. Under that framework, we ask whether the statute is ambiguous and, if so, whether the agency’s interpretation is reasonable. Id., at 842–843. This approach “is premised on the theory that a statute’s ambiguity constitutes an implicit delegation from Congress to the agency to fill in the statutory gaps.” FDA v. Brown & Williamson Tobacco Corp., 529 U. S. 120, 159 (2000). “In extraordinary cases, however, there may be reason to hesitate before concluding that Congress has intended such an implicit delegation.” Ibid.

This is one of those cases… If the statutory language is plain, we must enforce it according to its terms. Hardt v. Reliance Standard Life Ins. Co., 560 U. S. 242, 251 (2010). But oftentimes the “meaning—or ambiguity—of certain words or phrases may only become evident when placed in context.” Brown & Williamson, 529 U. S., at 132. So when deciding whether the language is plain, we must read the words “in their context and with a view to their place in the overall statutory scheme.” Id., at 133 (internal quotation marks omitted). Our duty, after all, is “to construe statutes, not isolated provisions.” Graham County Soil and Water Conservation Dist. v. United States ex rel. Wilson, 559 U. S. 280, 290 (2010).

2. If we give the phrase “the State that established the Exchange” its most natural meaning, there would be no “qualified individuals” on Federal Exchanges. But the Act clearly contemplates that there will be qualified individuals on every Exchange.

These provisions suggest that the Act may not always use the phrase “established by the State” in its most natural sense. Thus, the meaning of that phrase may not be as clear as it appears when read out of context.

3. The upshot of all this is that the phrase “an Exchange established by the State under [42 U. S. C. §18031]” is properly viewed as ambiguous. The phrase may be limited in its reach to State Exchanges. But it is also possible that the phrase refers to all Exchanges—both State and Federal—at least for purposes of the tax credits.

4. The Affordable Care Act contains more than a few examples of inartful drafting.

5. Anyway, we “must do our best, bearing in mind the fundamental canon of statutory construction that the words of a statute must be read in their context and with a view to their place in the overall statutory scheme.” Utility Air Regulatory Group, 573 U. S., at ___ (slip op., at 15) (internal quotation marks omitted). After reading Section 36B along with other related provisions in the Act, we cannot conclude that the phrase “an Exchange established by the State under [Section 18031]” is unambiguous.

6. Petitioners’ arguments about the plain meaning of Section 36B are strong. But while the meaning of the phrase “an Exchange established by the State under [42 U. S. C. §18031]” may seem plain “when viewed in isolation,” such a reading turns out to be “untenable in light of [the statute] as a whole.” Department of Revenue of Ore. v. ACF Industries, Inc., 510 U. S. 332, 343 (1994). In this instance, the context and structure of the Act compel us to depart from what would otherwise be the most natural reading of the pertinent statutory phrase.

7. In a democracy, the power to make the law rests with those chosen by the people. Our role is more confined—”to say what the law is.” Marbury v. Madison, 1 Cranch 137, 177 (1803). That is easier in some cases than in others. But in every case we must respect the role of the Legislature, and take care not to undo what it has done. A fair reading of legislation demands a fair understanding of the legislative plan.

8. Congress passed the Affordable Care Act to improve health insurance markets, not to destroy them. If at all possible, we must interpret the Act in a way that is consistent with the former, and avoids the latter. Section 36B can fairly be read consistent with what we see as Congress’s plan, and that is the reading we adopt.