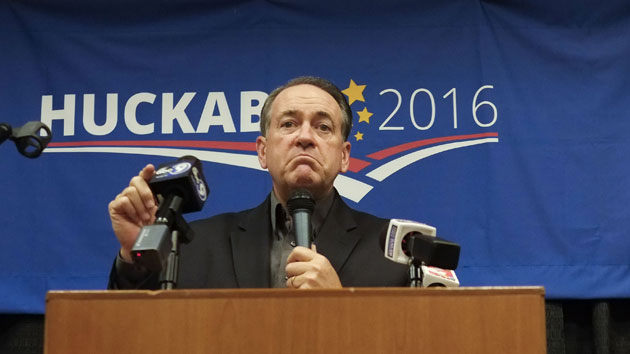 As of 10:01 a.m. on Friday, marriage equality was the law of the land, effectively ending one of the most divisive debates in American politics over the last decade.

Unless you’re former Arkansas Gov. Mike Huckabee, that is. Earlier this week, even before the Supreme Court issued its ruling, the GOP presidential candidate called on conservative Christians to engage in a massive “Biblical disobedience” campaign against the “false god of judicial supremacy,” comparing the widely expected majority decision in the gay marriage case to the Dred Scott case that upheld the Fugitive Slave Act:

For a lot of believers, the question comes, do we have civil disobedience, or do we have Biblical disobedience? For many of us, civil disobedience—when we believe that the civil government has acted outside of nature, and nature’s god, outside of the bounds of the law, outside of the bounds of the Constitution—we believe that it’s the right and the moral thing to do. Now I understand that’s a very controversial thing to say. But Todd, what if no one had acted in disobedience to the Dred Scott decision of 1857? What if the entire country had capitulated to judicial tyranny and we just said that because the Supreme Court said in 1857 said that a black person wasn’t fully human—suppose we had accepted that, suppose Abraham Lincoln, our president, had accepted that, would that have been the right course of action? And I don’t know of anyone, I mean seriously, I don’t know of anyone who believes that the Supreme Court made the right decision in Dred Scott.

In the war for marriage equality, Huckabee is the lonely Japanese soldier dutifully defending his island bunker years after the last shots were fired. He just doesn’t know it yet.