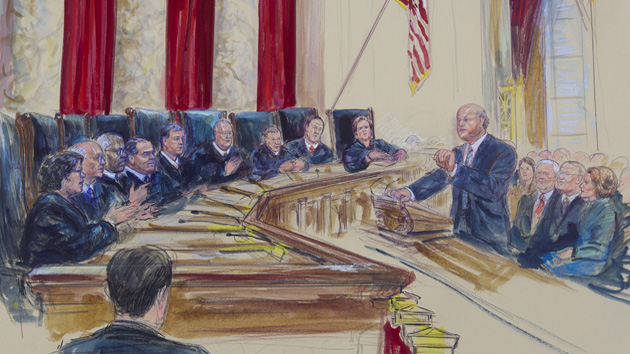 Michael Carvin, the lead attorney for the plaintiffs in the Supreme Court case of King v. Burwell, arguing that Obamacare subsidies are illegal.Dana Verkouteren/AP

As the end of the Supreme Court term nears, there’s a growing anxiety surrounding the fate of the Affordable Care Act—and for good reason. If the court rules for the plaintiffs in the case of King v. Burwell, more than 6 million people could lose their health insurance subsidies, which would likely make their insurance plans unaffordable. National insurance markets could enter a death spiral that would cause many more to lose coverage.

But despite all the legitimate concern, it seems unlikely that the Supreme Court will kill off President Barack Obama’s signature health care reform law. And that’s largely because of Chief Justice John Roberts Jr.

Roberts saved Obamacare the last time it was challenged, back in 2012, when he sided with the court’s four liberal justices to uphold the law. That doesn’t necessarily mean he’s a fan of the ACA. A Reagan Republican, Roberts has shown his conservative stripes in his decade on the court. But there are a number of reasons why he’s not likely to join his fellow conservatives jurists in knocking down the tax subsidies that now make insurance affordable for millions of people.

The King case is hitting the court late in the game. The previous challenge to the ACA was a fierce ideological battle over a health care law that was still largely hypothetical. Most of its major provisions hadn’t yet kicked in, so killing it off didn’t seem to have quite the same dire consequences as it would now that the nation’s insurance system has been reshaped and millions of people have gained access to care.

This time, the fight over the ACA isn’t so much an ideological dispute as it is a financial one. Billions of real dollars currently flowing to insurance companies, hospitals, doctors, and drug companies are at stake in the King case. With that much money involved, the players are also far more powerful and have much more to lose.

“Roberts has certainly been responsive to the interests and concerns of the business community,” says Doug Kendall. “In King, all the businesses to weigh in are on the side of the Obama Administration.”

The case has pitted big businesses against the tea party, and in that fight, Roberts is much more likely to come down on the side of business. In his years in private practice at the white-shoe law firm Hogan & Hartson, Roberts showed himself comfortable as part of the establishment. And since landing on the high court, his most predictable votes have been in cases involving business interests.

Overall, the Roberts court is far more business-friendly than any of of its modern predecessors. And Roberts has been a reliable vote for litigants backed by the US Chamber of Commerce, the nation’s largest business lobby. The liberal Constitutional Accountability Center (CAC) estimates that between 2006 and 2014, the Roberts court sided with the Chamber 70 percent of the time. That’s up from 57 percent during the term of the prior chief justice, William Rehnquist, and 43 percent when Warren Burger was in charge.

It’s not just liberals who have observed the trend. Judge Richard Posner, a conservative jurist on the Seventh Circuit Court of Appeals, co-authored a Minnesota Law Review article in 2013 that crunched Supreme Court data going back to 1946 and found that the Roberts Court was far more hospitable to business than most of its predecessors. Posner and his colleagues write:

Whether measured by decisions or Justices’ votes, a plunge in warmth toward business during the 1960s (the heyday of the Warren Court) was quickly reversed; and the Roberts Court is much friendlier to business than either the Burger or Rehnquist Courts, which preceded it, were. The Court is taking more cases in which the business litigant lost in the lower court and reversing more of these—giving rise to the paradox that a decision in which certiorari is granted when the lower court decision was anti-business is more likely to be reversed than one in which the lower court decision was pro-business. The Roberts Court also has affirmed more cases in which business is the respondent than its predecessor Courts did.

Posner et al. speculated that conservative Justices Antonin Scalia and Clarence Thomas weren’t all that keen on hearing business cases until Roberts and Samuel Alito joined the court—an indication that Roberts has swayed his conservative colleagues into the pro-business camp. That’s why it seems unlikely Roberts will side with the plaintiffs in King. “Chief Justice Roberts has certainly been responsive to the interests and concerns of the business community in his first decade on the Court,” says CAC founder Doug Kendall. “In King, all the businesses to weigh in are on the side of the Obama administration.”

Between 2006 and 2014, the Roberts court sided with the US Chamber of Commerce 70 percent of the time.

Indeed, the US Chamber of Commerce was never a huge fan of Obamacare, but when it filed an amicus brief in the first ACA challenge to go before the court in 2012, it didn’t ask the justices to kill the law. The Chamber simply argued that if the court found the individual mandate unconstitutional, it should also invalidate the rest of the law, which would become unworkable without the requirement that everyone buy insurance.

This time around, the Chamber hasn’t filed a brief, which is unusual given the stakes involved. But some of its big members have, including HCA, the nation’s largest health care company. (On its website, HCA says it is “closely aligned” with the Chamber.) And HCA has told the court that the King plaintiffs’ argument against Obamacare is “absurd.”

The nation’s multibillion-dollar health insurance industry has also weighed in on the case on the side of the government. So has the Catholic Health Association, the American Hospital Association, and a host of other health care and doctors’ groups, who argue that the plaintiffs have completely misinterpreted the law or its history.

On the side of the King plaintiffs? A couple of libertarian think tanks and the tinfoil-hat Association of American Physicians and Surgeons, which has a statement of principles that says it’s immoral for doctors to participate in Medicare and Medicaid. The group’s medical journal has claimed vaccines cause autism and that abortion causes breast cancer—but that HIV does not cause AIDS. The AAPS journal once erroneously alleged that illegal immigration had sparked a leprosy outbreak in the United States. Is establishment lawyer John Roberts really going to side with these guys over a business sector that accounts for nearly 20 percent of US GDP? Probably not.