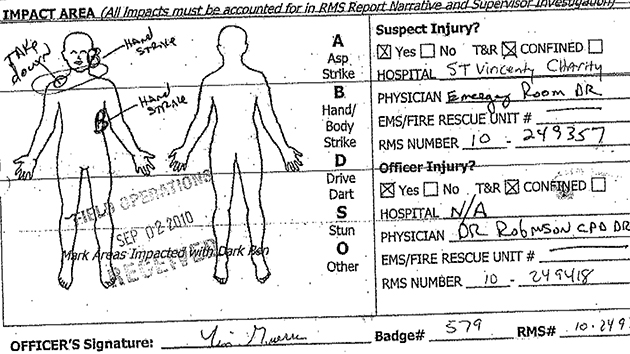 The ongoing criminal investigation into the death of Tamir Rice has focused mostly on Timothy Loehmann, the Cleveland police officer who shot and killed the 12-year-old in a park last November. Last month, a county official familiar with the case told Mother Jones that Frank Garmback, the officer who drove the police car to within a few feet of Rice moments before Loehmann stepped out and opened fire, was not under criminal investigation by the Cuyahoga County Sheriff’s Department, which turned over its investigation to county prosecutor on Wednesday.

As Mother Jones and others have reported, prior records showed that Loehmann “could not follow simple directions” and that “his handgun performance was dismal.” Garmback’s past record has received far less attention, even though he was involved in a use-of-force lawsuit that was settled not long before Rice’s death.

In 2012, Garmback was named in a civil rights lawsuit for allegedly using excessive force against a black woman named Tamela Eaton. Eaton, who was 39 at the time, had called Cleveland police in August 2010 to ask for help towing a car that was parked in front of her driveway. Garmback and another officer, Tim Guerra, were searching for a murder suspect nearby. When they tried to arrest a man walking down the street, Eaton heard the commotion and came out of her home, believing the officers were responding to her call. Eaton’s lawsuit asserted that Garmback initially argued with her, then rushed toward her “and placed her in a chokehold, tackled her to the ground, twisted her wrist and began hitting her body. Officer Guerra rushed over and proceeded to punch Tamela Eaton in the face multiple times.”

After the incident, county prosecutors charged Eaton for punching the officer and resisting arrest. In 2012, she filed suit against Garmback and Guerra; the case eventually moved to federal court. In 2014, Cleveland paid Eaton $100,000 to settle the case. The settlement did not appear on Garmback’s personnel record, and was largely unknown to the public until the Cleveland Plain Dealer reported on the settlement last December.

Below is the Cleveland police’s use of force report on the 2010 incident, which Guerra and Garmback disclosed as part of their defense in Eaton’s lawsuit: