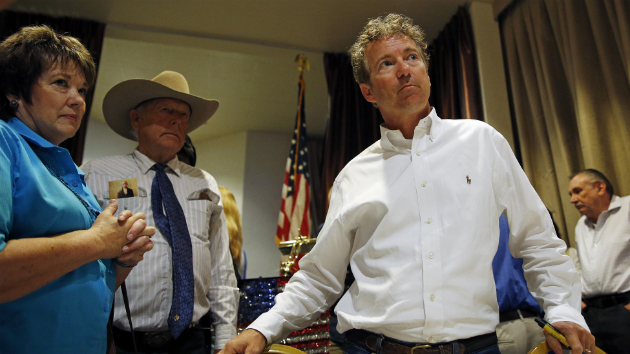 Rand Paul is notable among the nearly 20 GOP presidential candidates for his stated desire to reach out to African American voters, but Paul might have stumbled on that front yesterday when he met with anti-government activist and rancher Cliven Bundy, a libertarian hero who mounted a heavily-armed standoff against federal agents and who also became known for making racist comments.

Most GOP candidates head to Nevada to prostrate themselves before casino owner Sheldon Adelson, who spent more than $92 million supporting Republicans in the 2012 election. But Adelson and Paul are not on good terms. (Paul’s spin is that Adelson has told him he won’t finance attacks on the Kentucky senator’s campaign.

When Paul swung through Nevada on Monday he wound up at the Eureka Casino in Mesquite, a decidedly less glitzy venue than Adelson’s Venetian, and he spoke to a crowd of about 80, including Bundy. In 2014, Bundy faced off with federal agents over his refusal to move his cattle off of government-owned land. (He wouldn’t pay for grazing rights.) Initially Bundy was a poster boy for anti-government conservatives who praised his independence, but he lost much of his support when he gave an interview in which he said African Americans (whom he referred to as “Negroes”) were “better off as slaves”.

At first it appeared that Paul and Bundy had merely a passing encounter, but Politico reports that it was more than that. Paul apparently met with Bundy for 45 minutes, privately, after the event. According to Politico, Bundy said he was not expecting to get any direct time with Paul, but the candidate’s aides found a private room where the two could chat. The rancher said Paul wasn’t well-informed on government land use.

“I was happy to be able to sort of teach him,” Bundy told Politico.

Bundy, who eventually apologized for his race comments, said he didn’t like everything Paul had to say, but was pleased with his campaign so far. “In general, I think we are in tune with each other,” he told the Associated Press.

Paul’s campaign did not return a request for comment.