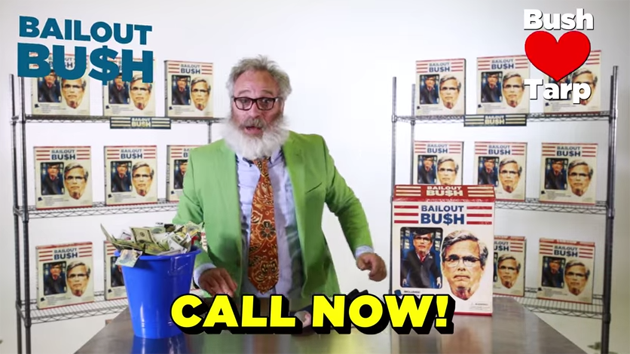 Screenshot from the video.

Here come the crazed attack ads. More than seven months out from the first votes in the 2016 presidential primaries, America’s Liberty, a super-PAC backing Sen. Rand Paul’s bid for the Republican nomination, has put out an online ad attacking Jeb “Bailout” Bush. It is…strange.

The video, which had more than 10,000 views as of Tuesday afternoon, is framed as an infomercial, with an exuberant, wild-bearded speaker named Max Power (perhaps borrowed from Homer Simpson, who took the same name from a hair dryer) serving as the pitchman. The ad offers a Bailout Bu$h action figure—which sadly does not actually seem to be for sale, probably because it appears to be a different action figure with an image of Bush’s face pasted on—as Power shouts about how Jeb worked for Lehman Brothers right before the crash and supported the Troubled Asset Relief Program. “This offer guarantees a presidential candidate cannot win a single primary state, let alone the general election,” a voice-over says at the end of the ad as Power bathes in a tub of money.

Per the Washington Times, America’s Liberty is spending in the five figures to run the ad online in early primary states, though it is also clearly running in DC, since I encountered it when it popped up before a music video on YouTube.

America’s Liberty has close connections to the Paul camp. The super-PAC’s founder and president is John Tate, who worked as Ron Paul’s presidential campaign manager in 2012 and currently also serves as president of Campaign for Liberty, a longtime Ron Paul organization.