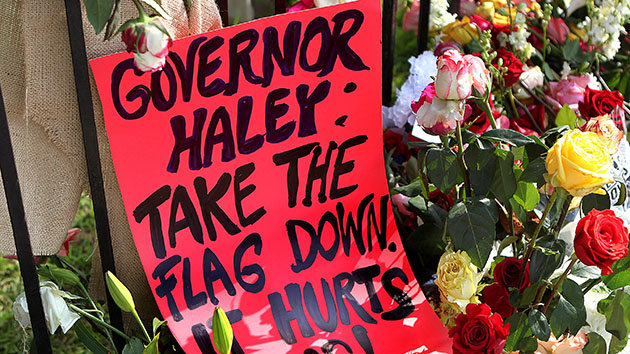 Following days of mounting pressure, Gov. Nikki Haley just announced her support for removing the Confederate flag from the grounds of the state capitol.

“It’s time to move the flag from the capitol grounds,” Haley told reporters at a press conference, where senators Tim Scott and Lindsey Graham were also present, on Monday.

“Some divisions are bigger than a flag. We are not going to allow this symbol to divide us any longer. The fact that people are choosing to use it as a sign of hate is something we cannot stand,” she added.

The flag has been the subject of controversy in the past, including in 2000 when large protests opposing its presence took place in Columbia, the state’s capitol. The issue resurfaced, creating national headlines, after the mass shooting inside a historic black church in Charleston. This weekend, a racist online manifesto apparently belonging to the suspected gunman, Dylann Roof, which included images of him posing with the flag, one in which he had a gun in his hand, surfaced.

Following the shooting, a slew of Republican presidential candidates—some of whom shied away from directly stating Roof had racist motives—have been asked about their stances on the Confederate flag. Although he condemned the shooting as an “evil act of aggression,” former Florida governor Jeb Bush ultimately said he did not know what was “mind or the heart of the man” behind it, despite the obvious racist symbolism Roof appeared to embrace. After once defending the flag as a “part of who we are,” Graham joined Haley on Monday in backtracking his longstanding support of the Confederate flag.