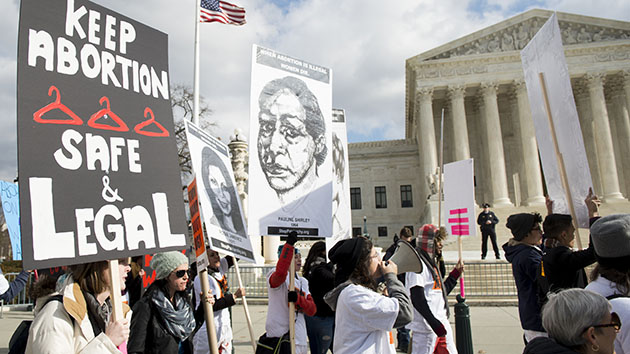 Rick Perry, the former Texas governor and 2016 Republican presidential candidate, does not want to talk about abortion. Specifically, he doesn’t want to discuss the draconian law that he signed two years ago, which was upheld by the 5th Circuit Court of Appeals this week and now threatens to shut down two-thirds of the state’s remaining abortion clinics.

During an interview on Fox News Wednesday, Perry pushed aside questions about the recent court decision. “I think the real issue for me is this has been settled in the state of Texas,” Perry told host Megyn Kelly before changing the subject to the economy, the border, and national security—”the big issues that I think the bulk of the American people really want to focus on.”

But the American people may not be able to avoid the issue of abortion as next November nears. This week’s ruling paves the way for the US Supreme Court to take up the most important abortion case in more than 20 years to determine how far states can go in cutting off access to abortion. If the high court takes the case, the justices’ decision could be announced right smack in the middle of the 2016 campaign, forcing candidates to discuss abortion whether they want to or not. And, as Perry seems to recognize, that could be bad news for Republicans.

The Texas case isn’t the only chance for the Supreme Court to reanimate the abortion debate, but it may be the best. A number of legal challenges to abortion restrictions passed in Republican-controlled states are slowly making their way through the courts. A few have already reached the Supreme Court and are waiting for the justices to decide whether to take them. There’s a Mississippi law struck down by the 5th Circuit, which the Supreme Court is currently deciding whether to take, that could close down the state’s only abortion clinic. And a North Carolina law that requires women to receive an ultrasound and listen to the doctor describe the fetus before getting an abortion was struck down in 2014 but has been appealed to the Supreme Court by the state.

But court watchers agree that the facts in the Texas case as well as an unresolved circuit court split make it the one most likely to be heard by the justices. “It only takes four justices” to take a case, says Caitlin Borgmann, a professor at the CUNY School of Law and a former state strategies coordinator at the Reproductive Freedom Project of the American Civil Liberties Union. “At least four of the justices expressed an interest in hearing a case of this kind,” she says.

Here’s how the case could take shape. Within the next 90 days, lawyers fighting the Texas law will officially ask the Supreme Court to take up, or grant cert for, the case. Because the current Supreme Court term concludes at the end of this month, the justices would accept the case this fall. Depending on the speed at which the two parties file their motions, the court could schedule oral arguments for anywhere from late 2015 to the spring of 2016.

“I don’t think voters are going to want a president who is going to appoint more Scalias and Thomases to the court.”

There’s a good chance the court would hear the case next spring when the primaries are in full swing. Its decision would be announced next June—just a month before the parties hold their conventions and kick off the general election season. If the case is delayed until the fall of 2016, it might have less of an impact because a decision would occur after the election. But an impending abortion decision in the fall of 2016 would still force candidates to take a stand.

Should the Supreme Court take the case, the question it will consider is whether or not the Texas law creates an “undue burden” on women’s right to an abortion. More practically, however, the case is about basic access to abortion services—whether states the can use clinic regulations to make abortion unavailable to millions of women. The Texas law’s requirements for abortion clinics and doctors performing abortions are so stringent that all but seven Texas clinics would be forced to shut down in less than three weeks.

The Texas case raises questions about basic access to abortions during the early stages of pregnancy, which polls show a majority of Americans support. Last month, Gallup reported an upswing in pro-choice sentiment in the last year. On the 40th anniversary of Roe v. Wade in 2013, a Wall Street Journal/NBC News poll found that a record 70 percent of Americans believed that landmark ruling should stand.

“The more that social issues are front and center the worse things will be for Republicans,” especially if Roe v. Wade is being debated, says Geoff Garin, the Democratic pollster who worked on Virginia Gov. Terry McAuliffe’s 2013 race in which the abortion issue figured prominently.

And the timing of the Texas case could make the high court itself into an important campaign issue—and one that could work to a Democratic presidential candidate’s advantage, according to Garin: “I don’t think voters are going to want a president who is going to appoint more Scalias and Thomases to the court.”