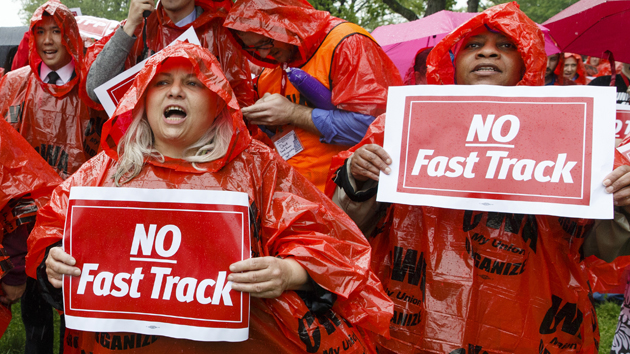 Demonstrators outside the Capitol.J. Scott Applewhite/AP

Update (6/12/15): The House narrowly voted in favor of passing the TPA legislation, 219-211, but not before House Democrats voted against a bill originally part of TPA legislation in the Senate. By voting against the Trade Adjustment Assistance bill, intended to compensate workers who are displaced by trade agreements, Democrats force the TPA legislation back to the Senate—where it likely will not pass.

The House is expected to vote today on the “fast track” trade authority bill that would allow the Obama administration to finish negotiating several major trade agreements now under discussion, including the divisive Trans-Pacific Partnership.

While every other president from Ford onward has been granted similar powers, today’s vote has turned out to be anything but routine. Critics who oppose the TPP and other pending agreements are working to stop the bill—and thwart the anticipated trade deals.

The fast-track process was set out in 1974’s Trade Act, which empowered Congress to pass Trade Promotion Authority bills—like the one slated to be voted on today—that allow presidents to negotiate and sign trade deals with less involvement from the legislative branch. Congress still gets to vote yes or no on any final agreement, but amendments are generally prohibited. In exchange, TPA bills let legislators lay out trade priorities and negotiating objectives for the president, and set requirements on how and how often the administration must check in while negotiations are underway.

This TPA, if passed, will guide presidential trade negotiations through 2021. It builds upon a bill that expired in 2007, and is likely more complex than any other in history, expanding congressional oversight and consultation while including new provisions on intellectual property, cross-border data protection, and the environment and human rights. It also increases transparency, requiring presidential administrations to make agreements public 60 days before signing them.

Though it passed the Senate by a vote of 62 to 37 in May, today’s House vote is expected to be much closer. Some Republicans have said they may vote against fast-track authority because they aren’t eager to hand over more power to the Obama administration. Many Democrats are opposing the bill, citing concerns that it doesn’t do enough to prevent overly secret deals and the expanded corporate power that could come with them.

If the House does vote to reestablish fast-track authority, it would likely ease the finalization of several notable trade agreements, including the Trans-Atlantic Trade and Investment Partnership, a new agreement with the European Union; the Trade in Services Agreement, an initiative being negotiated between 23 economies focused specifically on service industries like telecommunications and tech; and, of course, the controversial Trans-Pacific Partnership, a secretive trade agreement involving 12 countries that together account for 40 percent of global GDP.

Unions, environmentalists, digital rights advocates, and other advocacy groups have campaigned heavily against the Pacific deal—and the TPA that would allow negotiations to move forward. Critics have suggested the trade deal could bring environmental and labor abuses, reduce internet freedom, increase the cost of certain medications, and expand “investor-state-dispute settlements”—tribunals where companies can seek damages from taxpayers when US regulations interfere with their business. Backers of the Trans-Pacific Partnership insist that the agreement will be huge boon for the economy and increase the US national income by $77 billion annually.

Despite the opposition, House Republicans are confident the bill will pass. If it fails, its possible that negotiations on the TPP could continue—but not without major complications.