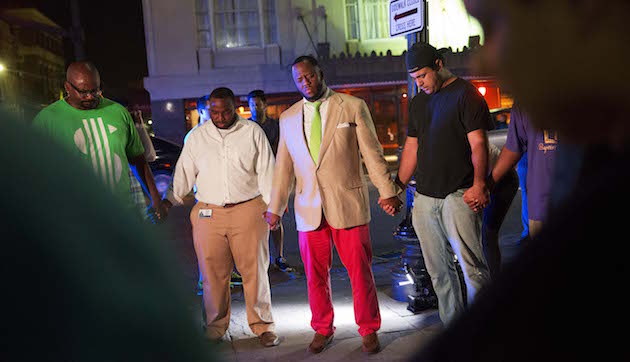 Nine people were killed in the shooting at the historic Emanuel AME Church in Charleston, South Carolina, on Wednesday night. On Thursday afternoon, Charleston County Coroner Rae Wooten officially identified all of the victims, some of whose names had leaked out over the course of the day. Here are brief sketches of their lives.

Pinckney, 41, was a pastor at Emanuel AME and a widely respected state senator. “Sen. Pinckney was a legend,” said fellow state Sen. Marlon Kimpton on CNN. “He was the moral compass of the state Senate.” Pinckney’s desk in the statehouse was covered with a black cloth after news broke of his death:

In SC, if a State Sen dies a black cloth is draped over their desk…this was Pinckney’s desk. http://t.co/fupAm838fJ pic.twitter.com/2ntw42e5TD

During his remarks on Thursday afternoon, President Obama said he knew Pinckney personally, along with other members of the church. “To say our thoughts and prayers are with them and their families and their community doesn’t say enough to convey the heartache and the sadness and the anger that we feel,” he said.

Coleman-Singleton, also a pastor at the church, was a coach at Goose Creek High School near Charleston. South Carolina’s high school sports governing body mourned her death on Twitter after it was announced on Thursday morning:

She was a celebrated track and field coach for Goose Creek High School and revered as a “positive light” to all who knew her.

“I saw her at work everyday and she always had a smile on her face,” Chris Pond, the baseball coach at Goose Creek, said to the Berkeley Independent.

Hurd, the manager of the St. Andrews branch of the Charleston County Public Library, was identified by her employer as one of the victims.

“Cynthia was a tireless servant of the community who spent her life helping residents, making sure they had every opportunity for an education and personal growth,” the library said in a statement on Facebook.

The library announced it would shut all of its branches on Thursday to honor Hurd.

Lady June Cole, the interim president of Allen University, said on Thursday that Tywanza Sanders, a 2014 graduate of the small historically black university in Columbia, S.C., was killed in the shooting. Cole called Sanders a “quiet, well-known student who was committed to his education” and who “presented a warm and helpful spirit.”

It’s not about how much money you got it’s not about materials you possess its about love faith belief hope determination perseverance passion pain patients. God gives his toughest battles to his strongest soldiers. I love these instruments but my love for God is greater. This acoustic guitar and my first musical love my trumpet my sacrifice will bring joy to others #moneymotivatemoney #grindovermatter #success #loveyours #giveGodcredit #trustinGod

Archbishop Foley Beach of the Anglican Church of North America wrote in a Facebook post on Thursday that Myra Thompson, the wife of the Rev. Anthony Thompson of Charleston’s Holy Trinity REC Church, was killed in the attack.

Ethel Lee Lance
The 70-year-old grandmother had worked at Emanuel AME for more than three decades. Her grandson Jon Quil Lance told the Post and Courier newspaper in Charleston that Lance was a hardworking Christian and “the heart of the family.”

SHE HAS A NAME: Ethel Lee Lance, worked at Emanuel AME Church in Charleston for 30 years. She was killed last night. pic.twitter.com/7OHjsnhD8f

Susie Jackson
The 87-year-old was a longtime church patron and Ethel Lance’s cousin, according to the Post and Courier.

Daniel L. Simmons Sr.
The 74-year-old was a ministry staff member at Emanuel AME and the former pastor of Greater Zion AME Church in the nearby town of Awendaw. His daughter-in-law, Arcelia Simmons, told ABC News that Simmons attended services at Emanuel on Sundays as well as weekly Bible study. Simmons died in the hospital after the attack.*

I can’t believe that Rev. Dan Simmons is gone. This man baptized me, married my parents, and eulogized my granny

Depayne Middleton
The 49-year-old mother of four sang in the church choir.

Correction: An earlier version of this article incorrectly stated that Allen University is located in Charleston. It is actually located in Columbia, S.C.

Correction: An earlier version of this article misspelled the town of Awendaw.