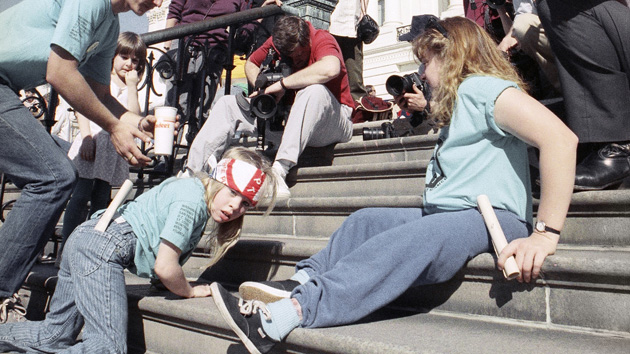 Eight-year-old Jennifer Keelan, left, crawls up the steps of the Capitol in Washington on March 12, 1990.Jeff Markowitz/AP

Twenty-five years ago this weekend, the Americans With Disabilities Act was signed into law, officially outlawing discrimination against disabled people in employment, transportation, public accommodation, communications, and government services. The law was a long time coming: Activists had fought for decades against unequal access to jobs and exclusion from public schools. But the ADA might never have gotten to President George H.W. Bush’s desk were it not for a group of activists in wheelchairs who took matters into their own hands earlier that year.

On March 12, 1990, hundreds of people with disabilities gathered at the foot of the Capitol building in Washington to protest the bill’s slow movement through Congress. Dozens left behind their wheelchairs, got down on their hands and knees, and began pulling themselves slowly up the 83 steps toward the building’s west entrance, as if daring the politicians inside to continue ignoring all the barriers they faced. Among the climbers was Jennifer Keelan, an eight-year-old from Denver with cerebral palsy. “I’ll take all night if I have to!” she yelled while dragging herself higher and higher.

Here’s some footage of the protest, via PBS’s Independent Lens:

The Capitol Crawl, as it became known, made national headlines and pushed lawmakers to pass the ADA into law. When Bush finally signed the landmark bill, it was seen as one of the country’s most comprehensive pieces of civil rights legislation to date. But it was not a total cure-all, according to Susan Parish, a professor of disability policy at Brandeis University. The Supreme Court later watered it down, she says, in a series of decisions that created a narrow definition of disability.

In 2008, lawmakers passed amendments to strengthen the ADA, but Parish says people with disabilities have still struggled to gain equal access to employment, in part because employers are expected to comply with the law but do not have to follow reporting requirements. “I feel that the country needs a full-scale affirmative action program for people with disabilities,” she said in a recent interview.

President Obama issued an executive order in 2010 requiring the federal government to hire more people with disabilities. In a speech earlier this week, he said the West Wing receptionist, Leah Katz-Hernandez, is the first deaf American to hold her position. But despite some progress since 1990, he acknowledged, “We’ve still got to do more to make sure that people with disabilities are paid fairly for their labor, to make sure they are safe in their homes and their communities…I don’t have to tell you this fight is not over.”