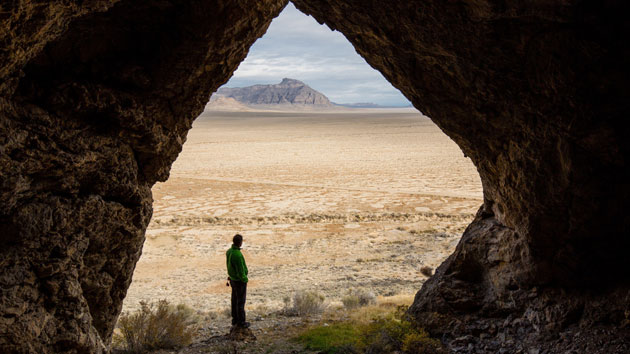 Basin and Range National Monument in Nevada, one of three new monuments created by President Obama in July.Courtesy of Tyler Roemer

For the last half century, Michael Heizer has been working on a secretive project in an isolated patch of the Great Basin Desert in southeast Nevada. It is an abstract art installation, more than a mile in length and a quarter mile in width, inspired by the Mayan ruins of Chichen Itza, and exhaustively carved out of concrete and dirt. “[I]t may be the most ambitious sculpture anyone has ever built,” the New York Times recently declared—”a pristine, lunar stretch of stark and unspeakable beauty, an hour’s bumpy drive from the nearest paved road.” It is almost certainly the only piece of remote land-art that is likely to become a campaign issue during the quest for the Republican presidential nomination.

Dubbed “City,” Heizer’s work is predicated on emptiness, and the artist and his patrons have long feared that his tableau would be marred by the development of the surrounding pubic lands. (He once threatened to destroy City when the Bush administration proposed building a nuclear waste dump at nearby Yucca Mountain in 2004.) Fortunately, Heizer has friends in high places. Senate Minority Leader Harry Reid (D-Nev.), who calls Heizer’s project “priceless,” lobbied President Barack Obama to protect the region surrounding City, known as the Basin and Range. In early July, citing his powers under the Antiquities Act of 1906, Obama signed an executive order designating a Rhode Island-sized swath of Nevada as a new national monument. One of the reasons the White House gave was to protect City, which it hailed as “one of the most ambitious examples of the distinctively American land-art movement.”

The monument designation, which affords a degree of protection similar to that of a national park, guarantees that City and its surroundings will survive intact for generations to come. And for the Republican presidential field, therein lies the problem.

Basin and Range National Monument is a feather in the cap of Obama and Reid (who quoted cowboy poetry in praise of the proclamation), but it represents something far more nefarious to Nevada Republicans—a federal power grab of already precious resources. Which means that opposition to Basin and Range’s monument designation stands a good chance of becoming a litmus test for Republican presidential candidates courting Nevada voters ahead of next February’s first-in-the-West presidential caucus.

Not long after the ink had dried on the president’s signature, Ben Carson slammed the decision, declaring that he was “deeply offended” at the president’s “disregard for discovering common sense decisions when it comes to deciding how best to protect natural resources and reconcile the economic impacts into local communities.”

After a town hall in Carson City last week, former Florida Gov. Jeb Bush followed suit. “I don’t think expanding the narrowing use of public lands is appropriate,” he told reporters. “There’s ways you can build consensus to protect the natural environment and allow people to access their land.”

Although most of the Nevada’s voters live in a handful of urban counties, the Basin and Range backlash fits neatly into the larger conservative critique of federal power in the Obama age. Heizer, who owns the land City sits on, is the exception in Lincoln County, where 98 percent of the land belongs to the federal government. Elevating that land to monument status puts it that much more out of reach for uses such as mining*. The state’s three Republican congressmen pushed a bill in January that would have prohibited the creation of new national monuments in Nevada without congressional authorization. (Rep. Mark Amodei angrily dubbed Basin and Range “Hairy Berry National Monument,” a weird riff on Reid and Obama’s first names.) Popular GOP Gov. Brian Sandoval, whose endorsement is coveted by 2016 candidates, also criticized the Obama administration’s move.

The fight over public lands in the West has only intensified in recent years. It was in rural Nevada last year, a few hours south of City, that rancher Cliven Bundy led an armed standoff against Bureau of Land Management agents over unpaid grazing fees. Few elected officials took Bundy’s side directly—especially after he started talking about “the Negro”—but his complaint of federal overreach struck a chord.

Case in point: When Sen. Rand Paul (R-Ky.) visited the state last month, he met privately with Bundy for 45 minutes. Paul hasn’t weighed in on Basin and Range directly, but two weeks before Obama’s proclamation, he reiterated his call for all of Nevada’s federal lands to be turned over to the state. “State ownership would be better, but even better would be private ownership,” Paul said. Sen. Ted Cruz (R-Texas) hasn’t gone quite as far as Paul, but in 2014 he proposed an amendment to a piece of hunting legislation that would have prohibited the federal government from owning more than 50 percent of the land in any state—meaning he would have put 31.1 percent of Nevada up for sale. (The bill failed.) Cruz’s campaign did not respond to a request for comment about his position on Basin and Range specifically.

For now, only two 2016 contenders have weighed in directly. But the campaign is only just picking up steam. At least seven candidates will attend a candidate forum near Lake Tahoe next month. We’ll see if they take a stand on City, and the 704,000 acres that now protect it.

*Correction: This piece originally suggested that the new national monument would be off-limits to ranching.