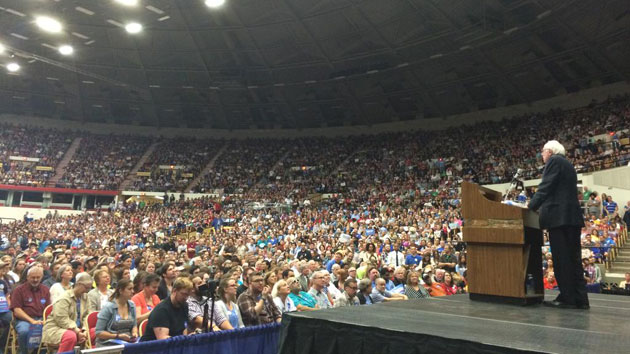 Sen. Bernie Sanders (I-Vt.) called for a “political revolution” at a campaign rally at Veterans Memorial Coliseum in Madison, Wisconsin, on Wednesday night, and just a few people showed up:

With Bernie Sanders about to come on in Madison, the arena is more or less full. pic.twitter.com/TXMV7Agtfz

Another view of the crowd for @BernieSanders. pic.twitter.com/e0Oyf63pzs

Sanders’ campaign estimated the crowd at about 10,000 people, the largest rally by any candidate during the 2016 campaign. Granted, it’s not even 2016 yet, but Sanders has continued to draw massive crowds everywhere he has gone (5,000 people in Denver; 300 people in an Iowa town of 240). It’s not necessarily a barometer for public support—Hillary Clinton still holds a comfortable lead in national polls—but it does show that his popularity stems from something much deeper than just good name recognition.