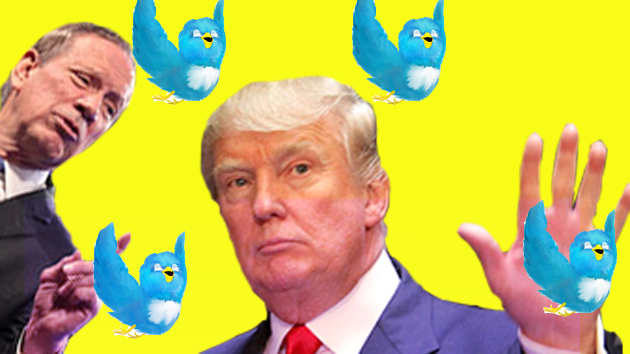 As a steady stream of companies dissociate themselves from Donald Trump over his recent comments accusing Mexican immigrants of being “rapists” who bring drugs and crime to the United States, the real estate mogul and GOP presidential candidate has taken to Twitter to lash out at his critics and vow legal retribution against the firms that have parted ways with him. The latest target of one of his irate tweet storms is fellow Republican presidential hopeful and former New York Gov. George Pataki.

.@GovernorPataki was a terrible governor of NY, one of the worst — would’ve been swamped if he ran again!

.@GovernorPataki couldn’t be elected dog catcher if he ran again—so he didn’t!

The back story behind the verbal smackdown? Earlier today, Pataki joined the growing number of people and companies that have taken issue with Trump’s comments about Mexican immigrants. Pataki posted a letter on Twitter calling on fellow Republicans to “denounce” Trump’s comments by “stand[ing] up for our party, for the ideals that made America great, and stand for the basic decency and integrity entitled to every American, no matter their heritage or nationality.”

As Donald Trump doubles down, I’m asking you to join me in standing up. http://t.co/6ShyC8Fry6 @ScottWalker @GovernorPerry @CarlyFiorina

Meanwhile, companies continue to kick Donald to the curb. The latest to distance itself from the mogul is Macy’s, which announced Wednesday that it will no longer carry “Donald Trump brand attire.” In a released statement, the department store wrote that it was “disappointed” and “distressed” by the billionaire’s comments. The decision to cut ties was influenced by a MoveOn.org petition, which had amassed 700,000 signatures by Wednesday morning.

Did Trump respond to Macy’s decision? You bet. Shortly after dissing Pataki, he refocused his aim on the retailer.

Interesting that @Macys criticized me but just paid $650,000 in fines for racial profiling. Are they racists?

Who is @Macys to pretend innocence when they “racial profile” all over the place? Paid big fine!