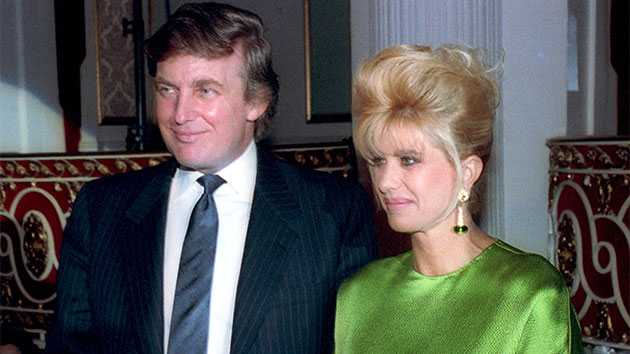 Donald Trump and his ex-wife, Ivana Trump at a 1991 gala in New York City.Luis Rubeiro/AP

So Donald Trump used to be married to Ivana Trump. According to an account resurfaced by Tim Mak and Brandy Zadrozny at the Daily Beast, the former Mrs. Trump once used the word “rape” during legal proceedings in connection with an event between her and her ex-husband, the current GOP front-runner:

Ivana Trump’s assertion of “rape” came in a deposition—part of the early ’90s divorce case between the Trumps, and revealed in the 1993 book Lost Tycoon: The Many Lives of Donald J. Trump.

The Daily Beast has the entire “violent assault.” It’s indeed harrowing. Trump has denied the allegations.

“It’s obviously false,” Donald Trump said of the accusation in 1993, according to Newsday. “It’s incorrect and done by a guy without much talent… He is a guy that is an unattractive guy who is a vindictive and jealous person.”

It’s important to note that this never went to court, Trump never faced any charges, and Ivana Trump herself walked back the allegations before the book in question was published:

“As a woman, I felt violated, as the love and tenderness, which he normally exhibited towards me, was absent. I referred to this as a ‘rape,’ but I do not want my words to be interpreted in a literal or criminal sense.”

This brings us now to Donald Trump’s lawyer who The Daily Beast reached out to for comment. He went on a tirade that would make Trump blush:

Michael Cohen, special counsel at The Trump Organization, defended his boss, saying, “You’re talking about the front-runner for the GOP, presidential candidate, as well as private individual who never raped anybody. And, of course, understand that by the very definition, you can’t rape your spouse.”

“It is true,” Cohen added. “You cannot rape your spouse. And there’s very clear case law.”

Realizing perhaps that denying the undeniable criminality of spousal rape was not the best way to kill the story, Cohen switches gears, making things worse:

“You write a story that has Mr. Trump’s name in it, with the word ‘rape,’ and I’m going to mess your life up…for as long as you’re on this frickin’ planet…you’re going to have judgments against you, so much money, you’ll never know how to get out from underneath it,” he added.

Trump’s lawyer continued to threaten the reporter by saying, “Tread very fucking lightly, because what I’m going to do to you is going to be fucking disgusting.”

One thing is clear: Trump’s lawyer has the same rhetorical style as Trump.

Shout out to my friend Nina Strochlic and former deputy Asawin Suebsaeng for helping report the story.