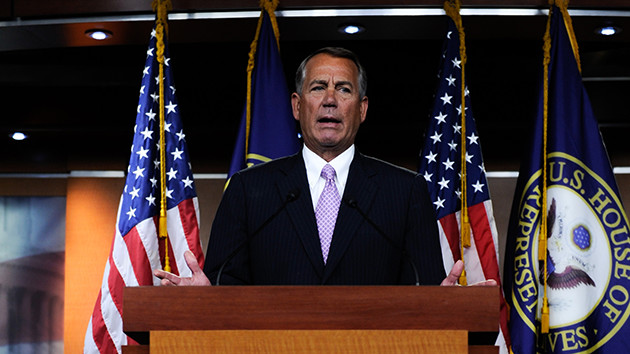 Last week, after a shooter killed nine parishioners at a historic black church in Charleston, South Carolina, the House Appropriations Committee quietly voted on a bill to effectively block any funding for the Centers for Disease Control and Prevention to research the causes of gun violence in America. At a press conference last Thursday, a reporter from WNYC’s The Takeaway asked House Speaker John Boehner about the committee’s vote, which was just part of a decades-long string of Republican rejections of official efforts to study gun violence. Boehner responded with this familiar argument:

Listen, the CDC is there to look at diseases that need to be dealt with to protect the public health. I’m sorry, but a gun is not a disease. And guns don’t kill people; people do. And when people use weapons in a horrible way, we should condemn the actions of the individual, not blame the action on some weapon. Listen, there are hundreds of millions of weapons in America. They’re there. And they’re going to be there. They’re protected under the Second Amendment. But people who use weapons in an inappropriate or illegal way ought to be dealt with severely.

In the wake of the mass shooting in Charleston, President Obama expressed frustration with Congress for not passing gun safety reforms, and underscored the immense and untold cost of gun violence. “Whether it’s a mass shooting like the one in Charleston, or individual attacks of violence that add up over time, it tears at the fabric of the community,” Obama told a room full of mayors two weeks ago. “It costs you money, and it costs resources. It costs this country dearly.”

Read more about the staggering costs of gun violence in this recent Mother Jones investigation.