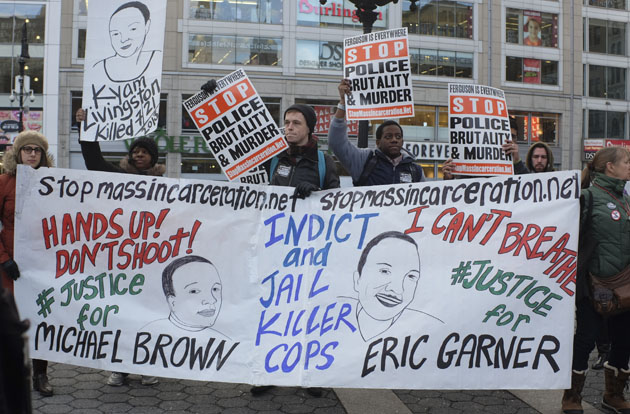 Last Friday, the Intercept released documents revealing that the Department of Homeland Security had been monitoring the Black Lives Matter movement since protests erupted in Ferguson, Missouri, last August. Emails obtained via the Freedom of Information Act showed that the department had tracked the movements of people at a Freddie Gray-related protest in Washington, DC, and had also monitored cultural events like DC’s Annual Funk Parade and prayer vigils in predominately black neighborhoods nationwide. DHS also tracked hashtags and other social media associated with Black Lives Matter.

Nusrat Choudhury, a staff attorney at the American Civil Liberties Union’s Racial Justice Program, says that while this type of surveillance may not be illegal, it may have significant chilling effects that do infringe on people’s rights. “There’s no question at all that the kind of mapping identified by the documents provided to Intercept chills people’s First Amendment-protected activities,” she says. “Of course it makes people feel afraid to go to these kinds of protests because of the impact it might have in terms of law enforcement’s ability to gather intelligence about them.” It may difficult to tell if this has happened, but, Choudhury says, “The line is drawn when that effect takes place.”

Federal, state, and local law enforcement agencies have the legal authority to monitor people and activities in public places. This includes attending, observing, and taking notes on protest activities. However, collecting and storing personally identifiable information on specific individuals is not allowed, with the exception of people suspected of criminal activity. Monitoring tweets and other social media posts, including any geolocation information associated with those posts, is also legal.

The federal government’s history of surveillance of black civil rights activists in the 1960s and 1970s also adds cause for concern, according to Choudhury. “We have these long-standing concerns that government has engaged in surveillance of people not because there’s evidence of wrongdoing, but because of what they think, what they believe, and what their ideology is, as well as the color of their skin.”

Determining whether the DHS’s monitoring of Black Lives Matter has had a chilling effect on individuals’ First Amendment rights or a disparate impact on African-Americans would require identifying people whose social media posts were monitored and who attended protests that were watched, and ascertaining the effect of the surveillance on them. “But based on the kinds of things that people interviewed by Intercept were saying, there is real concern that the impact is there,” Choudhury says.