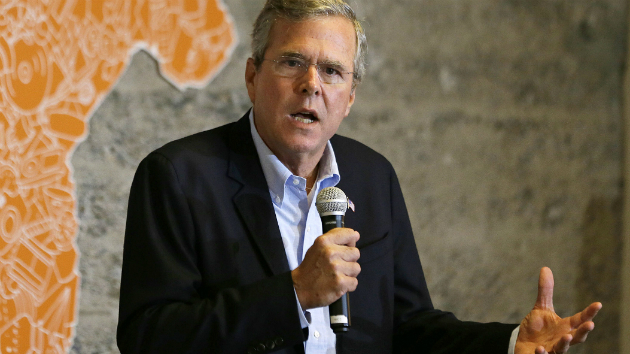 Jeb Bush says he wants to curb the influence of lobbyists in Washington—starting with stanching the flow of lawmakers who leave Congress to cash in on K Street as influence peddlers. “We need to help politicians discover life outside of Washington,” he said during a speech on Monday, during which he proposed an array of lobbying reforms. The centerpiece is a six-year ban on ex-members of Congress going into the lobbying business. (Currently, House members can officially start lobbying one year after leaving office and ex-senators must wait two years.) Government transparency advocates were heartened by Bush’s remarks, but they say the moratorium alone won’t solve the problem.

The issue is that the six-year ban would only prevent former members of Congress from taking part in “official” lobbying—a very specifically defined set of activities. Avoid those activities—or earn less than 20 percent of your income from lobbying activities—and you can avoid registering as a lobbyist. There’s no shortage of high-profile ex-lawmakers who have used this loophole to sell their insider expertise and thick Rolodexes to the highest bidder without ever registering as a lobbyist. Former Democratic Sen. Tom Daschle has worked for three lobbying firms since his departure from Congress 10 years ago, never once officially registering as a lobbyist. Instead, Daschle has served as a “senior policy advisor.” Similarly, upon leaving Congress in 1999, former Republican House Speaker Newt Gingrich immediately went to work for a number of private interests offering “quasi-lobbying” services, but called his work anything but lobbying. Notably, Gingrich was paid $1.65 million for his work as a “historian” for mortgage lender Freddie Mac.

Bush himself opened a lucrative consulting business after leaving the governor’s office in Tallahassee, seeing his annual income soar as he worked with many of the top names in Florida’s business community.

“You have countless cases of very high-profile former members who may well be in contact with their former colleagues, but don’t meet the threshold and therefore aren’t subject to the restrictions,” says Joshua Rosenstein, an attorney with Sandler Reiff who advises clients on compliance with lobbying regulations. “You can already sit on the sidelines and advise clients on congressional policy or the reality of moving a bill through either chamber without ever running afoul of anything.”

Rosenstein said that without tightening up the definition of “lobbying,” prohibiting members from doing it doesn’t mean a whole lot.

“The law defines lobbying and if the definition is too permissive having restrictions on lobbyists doesn’t really matter because there are so many holes you can drive a truck through,” he says.

In his remarks, Bush touched on that point as well, saying the definition of lobbyist should be expanded to include “the cadre of ‘government relations’ and ‘government affairs’ specialists.” But it’s unclear whether this would include consultants and advisers such as Daschle and Gingrich who have managed to avoid being pinned with the lobbyist label.

There’s also the fact that former members of Congress are just a small handful of the crowd that spins through the revolving door. For every former lawmaker hanging out his shingle on K Street, there are dozens more former Hill staffers and administration officials who go into the influence industry. While the members bring their big names and Rolodexes, it’s the former staffers who often do much of the real lobbying work.

Adam Smith, a spokesman for Every Voice, a liberal group that advocates for reform of campaign finance and lobbying, says his group was pleased with Bush’s proposals. “It’s a good step and I think the fact that the leading establishment candidate on the Republican side feels like he needs to talk about it as part of an anti-corruption plan shows the issue is getting traction,” Smith says. “But he’s not done, and he shouldn’t think he’s done. This should be the floor of a reform plan, not the ceiling.”

In addition to the six-year lobbying ban, Bush also said he thinks members of Congress should have to disclose the names of the lobbyists they meet with. At the moment, there is no such requirement at the federal level.

Bush hasn’t been shy about relying on lobbyists when it suits his purposes. In his campaign’s most recent disclosures, it reported having eight registered lobbyists “bundling” on behalf of the campaign. Together, these lobbyists have raised more than $228,000 for Bush. Bush is hardly alone in that practice. Democratic front-runner Hillary Clinton reported that 40 registered lobbyists are bundling for her campaign.

Smith points out that Bush’s fundraising efforts so far—in particular his work with Right to Rise, the super-PAC that supports him and can accept unlimited donations—undermines his credibility when it comes to talking about limiting the influence of special interests in Washington.

“Really rich people are writing really big checks to Jeb’s campaign and the question, in addition to all this lobbying stuff, is what is he going to do make sure those people don’t have extra influence,” Smith says. “What about those people who wrote $10 million checks, if he’s elected, they’re not going to get their calls returned? They won’t need lobbyists—they’ll have his cellphone number.”