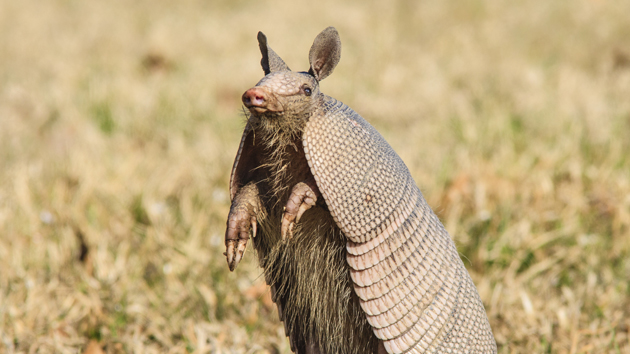 Hansen’s Disease—commonly known as leprosy—is having a moment in Florida. The extremely rare illness, which infects the nervous system and can cause deformities, has been transmitted to nine Floridians so far this year—close to double the number infected in previous years. Health officials believe armadillos may be to blame for the increase and have advised people to stay away from them. Because leprosy cases in the United States are so rare, we don’t hear about the disease too often. So here’s what you need to know:

According to the Centers for Disease Control an Prevention, the small, shelled slug eaters are carriers of leprosy. Research published in 2011 in the New England Journal of Medicine confirmed that armadillos were the only animals known to share the same strain of the disease as humans, and were believed to be the primary culprits behind new transmissions in the Southeastern United States over the past few years.

While the armadillo-to-human transmission risk is usually low, people can get the disease from eating under-cooked armadillo meat (yes that is a thing), or coming into contact with blood or feces.

All nine of Florida’s current cases came into direct with the animals. “There’s a clear reason why this is happening in Florida,” Dr. Sunil Joshi, President of the Duval County Medical Society in Florida, told CNN. “New homes are being developed and we are tearing down armadillos’ homes in the process. Now these creatures are coming out in the daytime and the people who are getting exposed are those working outside.”

Even though they are really, freaking ugly-cute, the CDC advises to avoid hanging out with armadillos if you can help it. You might also want to stay away from the cast of the Today Show just to be safe. (Side note: Being affectionate with armadillos isn’t the only way to get a seriously illness from an animal—the CDC also warns against chicken cuddling, which has ramped up rates of salmonella in the United States.)

So, leprosy is still a thing?

Leprosy is often seen as a plague of ancient times, but it was infecting millions around the world up until the 1990s. In 2000 the World Health Organization reported that leprosy had been “eliminated,” which is defined as less than one case per every 10,000 people globally.

These days there are around 215,000 new cases each year, about 200 of them in the United States, mostly in people who traveled from areas of the world where the disease is more common, including parts of Africa, South America, and Asia. The new cases that occur in the United States are concentrated in the South, primarily in Texas and Louisiana.

Because most of its sufferers are poor and live in remote areas in developing countries, Leprosy is included on the World Health Organization’s list of “Neglected Tropical Diseases.”

Often transmitted through close contact with an infected person (or armadillo), it primarily affects the nervous system and mucous membranes, but shows up visually as skin lesions on the body, and results in paralysis of the hands and feet, and blindness. It is a common misconception that leprosy causes your fingers and toes to fall off—tissue loss only occurs when an infected person loses sensation and undetected injuries get infected.

The good news is that if it’s caught early enough—and most cases are these days—it’s easily treated with a combo of antibiotics, administered for up to two years.

Could I have leprosy?

Probably not. First of all, up to 95 percent of people are naturally immune to the disease. In addition to being extremely rare and treatable, it’s difficult to get. It is spread much like the common cold—through droplets getting in your nose and mouth—but is far less contagious. People most likely to contract the disease are those who spend years in areas with high rates of the disease and people living with family members who have leprosy (because they share the same genetic susceptibility). Men are more likely to get the disease than women.

Still, because it is so rare, it can be hard to diagnose—especially because symptoms can take years to show up. In some cases patients didn’t exhibit signs until 20 years after transmission. Often the first symptom redness or a rash on the chest, hands, or feet that is accompanied by loss of sensation. Doctors can confirm its leprosy with a biopsy.

In many developing countries where the disease is more widespread, sufferers are still shunned and isolated. Health officials at the WHO are working to end the practice and the stigma, which often causes victims to delay seeking treatment due to fears of social consequences.

Sixteen elderly former patients still voluntarily live in the last colony that exits in the United States, in a remote community that is now part of Hawaii’s Kalaupapa National Historical Park. Thousands were exiled there until the state stopped the practice in 1969. There are now plans to preserve the colony as a historic structure and open the park to tourists—but not until the last patient dies or decides to leave. Until then the state is providing for all the survivors’ needs, from healthcare to food, which is shipped to the island weekly.