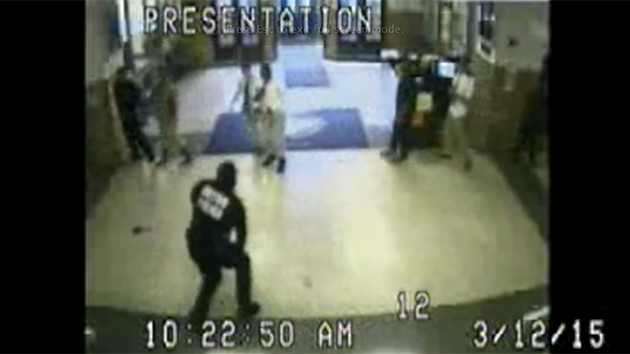 A Louisville police officer is facing assault and misconduct charges after his alleged use of force at a middle school.Screenshot from school surveillance footage

Over the past year, video footage from around the country of law enforcement officers killing citizens, many of them black, has brought scrutiny on policing in the streets. Yet, another disturbing police problem has drawn far less attention: Use of force by cops in schools. According to news reports and data collected by advocacy groups, over the past five years at least 28 students have been seriously injured, and in one case shot to death, by so-called school resource officers—sworn, uniformed police assigned to provide security on K-12 campuses.

As with the officer-involved killings that have been thrust into the national spotlight, government data on police conduct in schools is lacking. And while serious use of force by officers against school kids appears to be rare, experts also point to a troubling lack of training and oversight, and a disproportionate impact on minority and disabled students.

Here are some of the recent cases, which Mother Jones has looked into further: 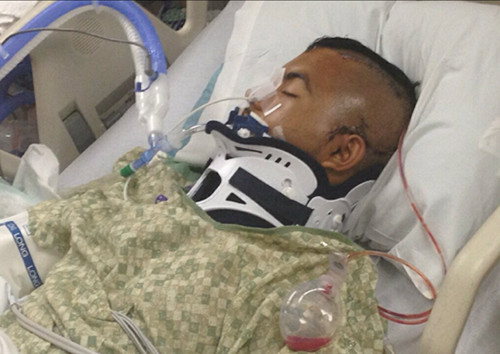 Noe Nino de Rivera after he was hospitalized. Photo courtesy of the family

The US and state governments do not specifically collect data on police conduct in K-12 schools. But some data has been gathered at the county and state level by the ACLU and other advocacy groups, including in Texas and North Carolina. Using news reports, the Huffington Post identified at least 25 students in 13 states recently who sought medical attention after getting tased, peppersprayed, or shot with a stun gun by school resource officers. (For more on these harsh tactics and a lawsuit they led to, read this Mother Jones story.)

The US Justice Department spent $876 million to fund nearly 7,000 school resource officers nationwide after Columbine, and another $67 million following the massacre at Sandy Hook Elementary.

From the war on drugs to “zero tolerance policies,” cops have been utilized in K-12 schools for decades. But the mass shooting at Columbine High School in 1999 caused their ranks to swell, with the number of police officers patrolling K-12 campuses approximately doubling to 20,000 by 2006, according to the National Association of School Resource Officers. The US Department of Justice spent an estimated $876 million after Columbine to fund nearly 7,000 school resource officers across the country. Since the massacre at Sandy Hook Elementary in 2012, the DOJ has spent another $67 million to fund an additional 540 cops in schools. Many school districts and local police departments have funded their own sworn law enforcement personnel for the job.

But much about this field remains unclear: According to a recent report from Philip Stinson, a Bowling Green University criminologist, “The existing research offers few answers to such basic questions as to how SROs are selected, the nature and extent of SRO training, and the strategic uses of SROs.”

Michael Dorn, a former school district police chief in Georgia, says that misconduct cases by school cops are rare and that overall their presence has helped improve campus safety. But the programs need to be better evaluated based on data, he adds. Studies in some school districts have shown that school cops helped reduce crime, truancy, and bullying. But others have found that the presence of cops in schools leads to increased ticketing and arrests for minor infractions. Jason Langberg, an attorney in Virginia who has represented victims of alleged abuse, explains that many officers end up stepping into matters of routine student discipline. They deal with “minor scuffles, a bag of marijuana, or even just talking back,” he says. “The vast majority of incidents don’t involve guns in schools.”

Dewey Cornell, a psychology professor at the University of Virginia who studies school safety, suggests that the rise of school cops has been based on misguided fear. After Sandy Hook, the NRA proposed putting them in every single school in America. But relative to overall gun violence, “schools are one of the least likely places for a shooting to occur, and pulling officers off the street and putting them on guard in a school lobby is short-sighted and dangerous,” Cornell says. “The fear of school shootings has been greatly overestimated because of the attention to a handful of tragic cases.”

Black students are arrested by school cops at a disproportionate rate, according to recent data from the US Department of Education.

Last March, the US Department of Education reported that 92,000 students were subject to school-related arrests in the 2011-2012 academic year, the first time the agency collected and published such data. Black students comprised 16 percent of the total students enrolled but accounted for 31 percent of arrests. And a quarter of the total arrested were students with disabilities, despite that they comprised only 12 percent of the student population. In recommendations to the White House published in May, the President’s Task Force on 21st Century Policing advised that law enforcement agencies analyze data on all stops, frisks, searches, summons, and arrests—and seperate out the data for school detentions. “Noncriminal offenses can escalate to criminal charges when officers are not trained in child and adolescent development,” the report noted.

Often young police officers are on the job, according to the advocacy group Strategies for Youth, which works with police departments and school districts on training. Yet, a national survey conducted in 2013 by the group found that police academies in only one state, Tennessee, offered training specifically for officers deployed to schools. The majority of academies, the survey noted, “do not teach recruits how to recognize and respond to youth with mental health, trauma-related and special education-related disorders.”

In February, Michael Reynolds, a black high school student in Detroit, testified to the task force about an interaction with a cop at his school. “Before I could explain why I did not have my [student] badge I was escorted to the office and suspended for an entire week,” he said. “Many young people today have fear of the police in their communities and schools.”