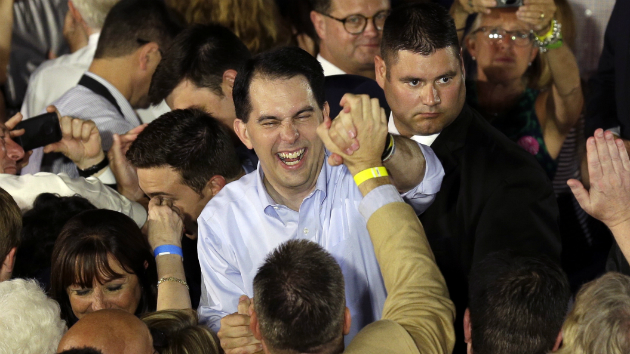 On Thursday morning, the Wisconsin Supreme Court squashed a criminal investigation into whether Gov. Scott Walker’s campaign illegally coordinated with conservative dark-money groups to defeat a recall effort against him in 2012. The sharply worded decision aggressively slapped back the local prosecutor leading the probe and contended there was no constitutional basis for the investigation. This move appears to permanently settle a matter that posed a potential threat to Walker’s presidential ambitions.

The inquiry focused on whether Walker’s top advisers worked with a dozen outside groups—politically active nonprofits that do not disclose their donors—to run campaign ads opposing the recall campaign that was launched after Walker crushed public sector unions in his state. On the federal level and in most states, it is illegal for outside groups that can collect unlimited amounts of money to work closely with candidates they support. In today’s decision, the Wisconsin court ruled there was no legal rationale for an investigation because the dark-money groups did not explicitly call for voters to vote against the recall. Instead, they put out a slightly less specific message: support Walker. As a result, the court ordered the investigation to halt immediately—and they instructed prosecutors to destroy all related documents and free witnesses from the obligation to cooperate.

“To be clear, this conclusion ends the…investigation because the special prosecutor’s legal theory is unsupported in either reason or law,” Justice Michael Gableman wrote for the majority in the four-to-two decision. “Consequently, the investigation is closed.”

Coincidentally or not, Grableman and three other conservative justices who joined in the majority opinion were all supported in their own elections to Wisconsin’s highest court by several of the same groups targeted by the investigation. None recused themselves. Some good-government experts had called on them to do so, as did the prosecutor in the case, noting that judging an investigation involving their financial supporters posed a conflict of interest.

In the dissenting opinion, liberal Justice Shirley Abrahamson suggested her counterparts were bent on killing the investigation, no matter the legal rationale. Abrahamson pointed out that the inquiry was examining several possible areas of illegal activity. But because of the ruling, investigators can’t pursue the other areas of possible wrongdoing, she wrote. She criticized “the majority opinion’s blatant attempt to reach its desired result by whatever means necessary.”

Because the Wisconsin Supreme Court is the highest court in Wisconsin, there is nowhere else to take the case and the matter is closed. It also sets a precedent allowing outside groups to work directly with candidates, so long as these outfits don’t explicitly tell voters how to vote.