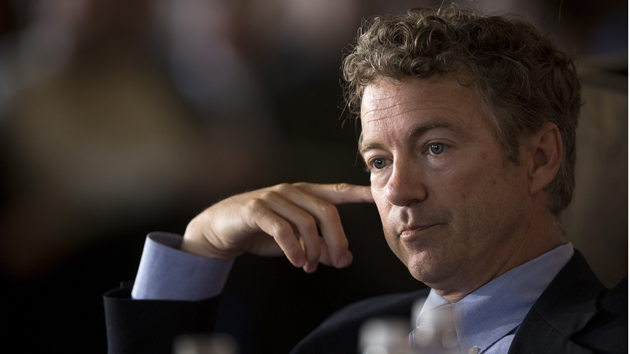 After years of investigation by the Department of Justice, three top Rand Paul associates, including the senator’s nephew-in-law, were indicted for their role in an alleged attempt to buy an influential Iowa state senator’s endorsement of Ron Paul during his 2012 presidential campaign. None of these operatives, who served as top Ron Paul campaign aides, is currently on the payroll of Rand Paul’s presidential campaign. But two of them—Jesse Benton, who is married to Paul’s niece, and John Tate—run a pro-Rand Paul super-PACs that has raised $3.1 million to support Paul’s presidential campaign.* The third man indicted, Dimitri Kesari, has served as an aide to both Rand Paul and his father.

Last year, former Republican Iowa state Sen. Kent Sorenson pleaded guilty to campaign finance charges accusing him of helping to cover up a scheme for the Ron Paul campaign to pay him more than $70,000 to switch his endorsement immediately before the 2012 Iowa caucus, from Michele Bachmann to Ron Paul. Sorenson has been awaiting sentencing pending his cooperation in a further investigation, but it hasn’t been clear who on Ron Paul’s staff would be caught up in the scandal. At the time Benton served as the campaign’s chairman, Tate as the campaign manager, and Kesari as the deputy campaign manager.

All three men were charged with criminal conspiracy and federal charges related to falsification of government records. Tate and Benton face charges of making false statements to federal investigators; Kesari was indicted on one count of obstruction of justice for allegedly trying to persuade Sorenson to deny the scheme when pressed by prosecutors.

According to the indictment, Sorenson negotiated with the Paul aides and eventually met with Kesari in an Iowa restaurant, where the Paul aide passed him a $25,000 check. The check was never cashed, however, and eventually wound up in the hands of an Iowa special prosecutor investigating a possible breach in ethics rules by Sorenson. Under federal law, the campaign could have legally paid Sorenson openly, but Iowa Senate rules prohibit lawmakers from receiving compensation for their endorsements. According to prosecutors, the campaign instead routed the payments through a Maryland audio-visual company connected to Kesari’s brother. During the course of the Iowa investigation, Sorenson acknowledged receiving $73,000 from the Maryland company but couldn’t explain why that was. Paul campaign records show the campaign paid the Maryland company roughly $82,000. Though Sorenson pleaded guilty to taking the money and lying to investigators about where it came from, his indictment did not name who authorized the payments.

The federal investigation has been spun by Paul insiders as the result of complaints by a disgruntled former Ron Paul supporter, Virginia conservative operative Dennis Fusaro. Fusaro certainly stoked the investigation by leaking emails to reporters showing Benton, Tate, and Kesari corresponding with Sorenson associates, as well as an audio recording of Sorenson admitting his role. Last summer, a leaked grand jury subpoena showed that that Justice Department investigators were casting a wide net in their pursuit of the case, demanding email records from much of the 2012 staff and even Ron Paul himself.

The indictment makes clear that investigators found incriminating correspondence. Included in the indictment are details of email conversations between the Paul aides about authorization of the payments to the audio-visual equipment company. Other emails show them responding to others on the campaign staff about the payments. In one email exchange described in the indictment, from June 2012, an invoice from the AV company led Tate to ask Kesari, “What is this? What is it for, who is it? Why do we keep paying them? The last payment was supposedly the last.”

Kesari responded: “This is the last payment for kent Sorenson [sic]. The deal jesse agreed to with kent.”

After media reports about the brewing scandal broke in September 2013, the indictment alleges, Kesari flew to Nebraska and then drove to Iowa to meet with Sorenson. Kesari allegedly asked Sorenson to prove he wasn’t wearing a recording device and then demanded he return the $25,000 check he had earlier given to him. Kesari also allegedly tried to convince Sorenson not to discuss the campaign’s role in the payments with federal investigators.

While Kesari, Benton, and Tate are not working for Rand Paul’s campaign, their indictment creates a major controversy for the candidate on the eve of the first GOP debate. In a statement to BuzzFeed‘s Rosie Gray, Ron Paul questioned the timing of the indictment against his former staffer: “I think the timing of this indictment is highly suspicious given the fact that the first primary debate is tomorrow.” Rand Paul’s campaign raised a little more than $7 million in the second quarter of the year, and the three super-PACs supporting his presidential bid have raised some $6 million. The largest, America’s Liberty PAC, is run by Tate and Benton, who also leads Campaign for Liberty, a politically active nonprofit founded by Ron Paul. With $3.1 million in cash on hand, the super-PAC is a major part of Paul’s campaign apparatus and has already released videos attacking his opponents.

Benton, who is married to Ron Paul’s granddaughter, became something of a hot commodity in the world of conservative politics following the 2012 Ron Paul campaign, which was seen as remarkably successful despite Paul’s defeat. In late 2012, he was hired by Senate Majority Leader Mitch McConnell to be his campaign manager. Kesari was also hired to work for McConnell.

Benton resigned from McConnell’s campaign last August after Sorenson pleaded guilty, but he reemerged in March as the head of the pro-Rand Paul super-PAC.

Kesari was arraigned today in an Iowa court, and Benton and Tate will be arraigned on September 3. The Rand Paul campaign has yet to release a statement on the indictments.

Correction: An earlier version of this article incorrectly stated that Tate ran another pro-Paul super-PAC, Concerned American Voters. None of the three men who were indicted has a connection with that PAC.