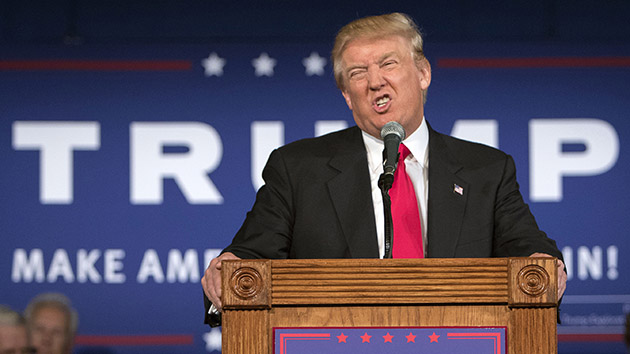 As Donald Trump proudly observes whenever humanly possible, he’s rich. Richer than you, dear reader, and certainly richer than me.

A lot of that money has come from large-scale real estate ventures, but a decent chunk of change has come from his willingness to shill for seemingly any product that can get him in front of a camera. Over his decades in the public spotlight, Trump has regularly appeared on TV to hawk technology fads, pizza, or a comfortable night’s sleep.

Mother Jones has previously chronicled Trump’s track record as a salesman of steaks and board games. Here is an incomplete compilation of his greatest commercial hits, culled from YouTube, demonstrating the full range of his shamelessness (or versatility, depending on your perspective) as a pitchman.

Trump and some creepy sheep sell a good night’s sleep on Trump-branded mattresses:

Even an adolescent can receive a late-night answering-machine message from Trump. All it takes is a Toshiba computer:

Trump and his then-wife Ivana share some pizza, though he eats his slice backward. Un-American!

With pizza, as with all things Trump, size matters:

Trump is a friend to all species, including the strange ones that hang around McDonald’s:

A glimpse behind the scenes to see how the magic is made:

NBA star Kevin Garnett, of my hometown Minnesota Timberwolves, is among the greatest living Americans. A real winner! He also made an ad with Trump for Nike:

“The Fight Before the Fight,” apparently a string of Pepsi ads before a Mike Tyson fight, brought us this video, a reminder of just how long Trump has been followed by a giant swarm of press:

Video phones are the future! Trump says they are probably better business than real estate. On the other hand, who has ever heard of ACN?