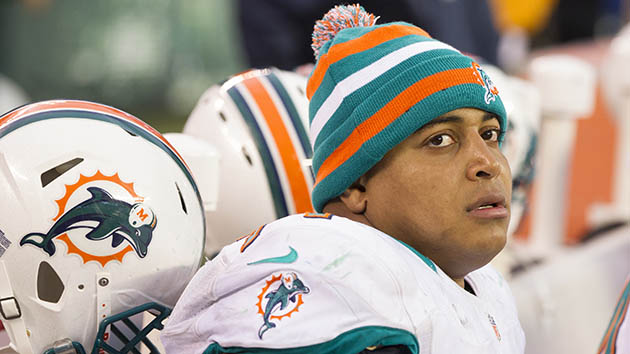 Jonathan Martin, the ex-professional football player known best for being at the center of a major NFL bullying investigation, retired earlier this summer. At the time, reports indicated that the 26-year-old Pittsburgh native was quitting due to a back injury that would have kept him off the field for the entire upcoming season. But many thought that the bullying scandal—according to an NFL investigation, some of his Miami Dolphins teammates constantly taunted him with jokes about his sexuality and race—had much more to do with it.

Martin posted a candid, raw note to Twitter on Wednesday, revealing that he’d attempted suicide on “multiple occasions” and writing that he hoped telling his side of the story might “help some other chubby, goofy, socially-isolated, sensitive kid getting bullied in America who feels like no one in the world cares about them.” Read more of his note below (the actual tweet is embedded at the bottom):

You move to Los Angeles at 10 & attend JTD, then Harvard Westlake, both environments that are completely new to you. You’re one of just a handful of minorities in elite private schools. You learn to tone down your size & blackness by becoming shy, introverted, friendly, so you won’t scare the little rich white kids or their parents. Neither black nor white people accept you because they don’t understand you. It takes away your self-confidence, your self-worth, your sanity.

You’ve been told you’re not “black enough” your entire life. It nearly destroys you, many times, not fitting in. Your talent & accomplishments on the field never seem to be able to overcome the demons that you carry with you from your middle school and high school experience. You’re always inadequate, always the “pussy,” the “weird kid who acts white.”

You overcompensate, create a persona separate from who you really are, use it as motivation to gain respect from playing a game. Make a fool of yourself at times. Anything in the quest to one day to feel “cool.” You see football as the only thing that you are good at, your only avenue to make the shy, depressed, weird kid from high school “cool.” To the outside world, many assume you to be somewhat egotistical, womanizing, over-the-top; a typical football player.

Years later, your time in the NFL is a wake up call. In all likelihood, anyone else in your shitty locker room situation probably wouldn’t take everything so personally, would’ve been able to brush it off and say “fuck it, you’re making millions. You’re starting as a rookie. You’re living your dream.” But you’re different. Have always been different. Have always been more sensitive.

You thought your same work ethic that had made you a two-time All-American, a 2nd Rd NFL draft pick, would earn you respect. After all, you have achieved what only a select few other first-year players achieved: starting all 16 games, barely missing a snap.

You are very wrong. You realize years later, reflecting on your experiences, that sometimes you need to take what you want, what you earned, from people who refuse to give it to you. You need to demand respect, and be willing to fight for it every day. The whitewashed, hermetically-sealed bubble you grew up in and were educated in did not provide any of those lessons.

You were raised in a good household. You know that you are a flawed person. Have done stupid, regrettable things. But you know right from wrong. And consider integrity to be incredibly important. The worst thing of all, in your mind, is being called a liar.

Your job leads you to attempt to kill yourself on multiple occasions. Your self-perceived social inadequacy dominates your every waking moment & thought. You’re petrified of going to work. You either sleep 12, 14, 16, hours a day when you can, or not at all. You drink too much, smoke weed constantly, have trouble focusing on doing your job, playing the sport that you grew up obsessed with.

You play another year and a half and get badly injured. You want to keep playing, but having broken free of the addiction that football had been, you know inside that risking permanent debilitating injury isn’t worth it. So you retire.

You realize that your experiences have taught you that you need to leave the baggage behind. “Friends” who you played high school football with saying whatever to get their name in an article. Former coaches blowing up your phone trying to be your financial advisor. Your god father suddenly appearing your senior year of college out of thin air bearing gifts, trying to get tickets to your games & slyly asking your parents to manage your money.

You realize who truly has had your back. Who the people are who you need to embrace. And cherish every moment you have had with them. You let your demons go, knowing that, perhaps, sharing your story can help some other chubby, goofy, socially-isolated, sensitive kid getting bullied in America who feels like no one in the world cares about them.

And let them know that they aren’t alone.

If you don’t know… Now you know pic.twitter.com/hE3vimkXdu