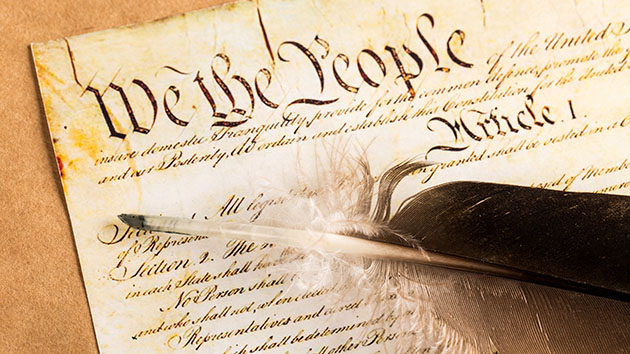 For the past several years, the issue of birthright citizenship has slowly worked its way into the Republican agenda. Bills to end birthright citizenship for undocumented immigrants have routinely cropped up in Congress. So-called “anchor babies” have become a political target on the right. But now, thanks to GOP presidential front-runner Donald Trump’s call to end birthright citizenship for the children of undocumented immigrants, the issue is front and center, forcing the other 16 Republican candidates to make an uncomfortable choice: support rolling back the 14th Amendment, which granted equal rights to former slaves after the Civil War, or look weak on unauthorized immigration.

Enter John Eastman and Lino Graglia, two conservative constitutional scholars offering the Republican candidates a third option: an alternative history of the 14th Amendment. In their telling, the amendment was never intended to grant citizenship to the children of undocumented people. In other words, Trump and those who agree with him are not calling to repeal the 14th Amendment. They are calling to restore it.

Sen. Ted Cruz (R-Texas), who has cozied up to Trump as the real estate mogul has risen in the polls, is also touting this view. Back in 2011, Cruz said arguments like those put forward by Eastman and Graglia “are not very good.” But this week he walked that back, telling Fox News host Megyn Kelly that there are “serious legal scholars” on both sides of the issue, and that he wants to end birthright citizenship by any means possible.

Eastman says interest in the issue has recently taken off. “Every time I hang up the phone, another one rings,” he says. “It’s reporters, it’s public policy shops.” Trump, he says, has not called.

“I’m grateful to him for raising [birthright citizenship] and making it popular,” Graglia says of Trump.

To back up this claim, Eastman and Graglia point to the congressional record in the 1860s, when the 14th Amendment was debated, particularly the discussion of whether members of Indian tribes were included. (Congress gave American Indians birthright citizenship by statute in 1924.) But that ignores what many legal scholars believe is a clear record indicating the opposite. For instance, when one senator asked during the writing of the Citizenship Clause whether “it will not have the effect of naturalizing the children of the Chinese and Gypsies born in this country,” the response from a supporter of the clause was, “Undoubtedly.”

Conservative media outlets have publicized the ideas of Eastman, Graglia, and a handful of other legal scholars. Talk radio host Mark Levin expounded on it on his show. National Review‘s Andrew McCarthy recently wrote that Graglia “was clearly right that the Fourteenth Amendment, far from compelling the grant of birthright citizenship, is better understood as denying it.” The conservative magazine has made it a subject of debate, first publishing an article by conservative lawyer John Yoo supporting birthright citizenship, then one by Eastman defending his position. The Daily Caller ran an article on Graglia’s argument titled, “University Chair Makes Pretty Convincing Argument Against Constitutionality of Birthright Citizenship.”

In April, the House Judiciary Committee’s Subcommittee on Immigration and Border Security held its first hearing in 10 years on birthright citizenship, where Eastman and Graglia explained their interpretation of the 14th Amendment. The chairman of the House Judiciary Committee, Rep. Bob Goodlatte (R-Va), declared that the question of whether the crafters of the amendment intended to include the children of unauthorized immigrants is “far from settled,” and that “in any event, we must still determine if it is the right policy for America today.”

Though the other GOP presidential candidates have not embraced Graglia and Eastman’s specific ideas, the list of those who support birthright citizenship (Jeb Bush, George Pataki, Carly Fiorina, John Kasich, and Mike Huckabee) is shorter than the list of those open to amending it (Trump, Cruz, Marco Rubio, Rand Paul, Bobby Jindal, Lindsay Graham, Rick Santorum, Ben Carson, and Chris Christie). In 2011, Sen. Rand Paul (R-Ky.), co-sponsored a bill to change the Citizenship Clause, saying in a statement that it was incorrect to assume the “the 14th Amendment confers birthright citizenship to the children of illegal aliens, either by its language or intent.” Wisconsin Gov. Scott Walker wobbled on the issue for a week before announcing, “I’m not taking a position on it one way or the other.” Former Texas Gov. Rick Perry shrugged off the issue as “inconsequential” compared with the task of securing the border.

Eastman and Graglia, however, may not be the best proponents of their theory. Both have a history of controversial comments and opinions that make them easy prey for Democrats. Eastman, a professor at Chapman University School of Law in California, is the chairman of the National Organization for Marriage, a group that fought bitterly against same-sex marriage, and he once equated homosexuality with “barbarism.” Graglia, of the University of Texas at Austin’s law school, is a longtime opponent of affirmative action and busing programs. His comment in 1997 that black and Hispanic students “are not academically competitive with whites” earned him the moniker “the most controversial law professor in America.” At April’s hearing, instead of inquiring about Graglia’s views on the Citizenship Clause, Democrats on the committee instead grilled him on these past statements and entered old articles about them into the record. For a Republican Party that hopes to appeal to Hispanic voters in particular, Graglia may not be the best ambassador on the citizenship debate, which many already find offensive.

In recent years, the first people to introduce the idea that birthright citizenship is more limited than is commonly understood were two professors, Peter Schuck of Yale Law School and Rogers Smith of the University of Pennsylvania, who argued in a 1985 book that Congress could exclude the children of undocumented immigrants from automatic citizenship. While they hold to that belief today, they don’t seem particularly pleased with the Pandora’s Box they opened.

“This is just NOT an issue that should be occupying the country’s attention at this moment, if ever,” Smith said in an email. “We have far, far more important problems to deal with that we are not addressing, including mounting economic inequalities, persisting racial inequalities, environmental degradation, crumbling infrastructure, a crippled labor movement. That’s why I rarely talk about the issue these days. I believe very strongly that our focus should be elsewhere.”