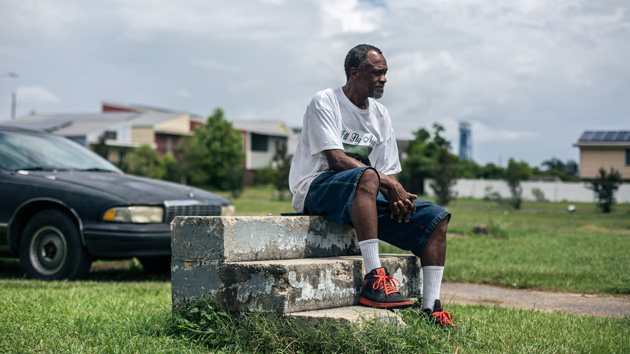 Robert Green, a Hurricane Katrina survivor, sits in June on the steps that once led into his mother's home in the Lower Ninth Ward in New Orleans.Li Muzi/Zuma

Ten years ago this month, Hurricane Katrina slammed into the Gulf Coast, killing at least 1,833 people. In total, more than 400,000 people in New Orleans were displaced from their homes.

Four of the city’s poorest neighborhoods, including the Lower Ninth Ward, are still largely abandoned.

Those with means evacuated the city before the hurricane struck, and in the coming months and years, many of them attempted to return to rebuild their lives. But it wasn’t so simple: In October 2005, National Guard troops blocked more than 10,000 people from visiting their property in the Lower Ninth Ward, a predominately African American neighborhood that had suffered the most damage from the hurricane. Three years later, tens of thousands of people were still living in trailers issued by FEMA that were found to contain high levels of toxic formaldehyde.

Now, a decade after the storm, much of the city has bounced back. According to the Data Center, a Louisiana-based research group, 40 of the city’s 72 neighborhoods have regained more than 90 percent of their population, and of these, 16 neighborhoods now have even more residents than they did before the levees failed.

But recovery has not been even: Four of the city’s poorest neighborhoods, including the Lower Ninth Ward, are still largely abandoned, with less than half of their pre-storm populations. This summer, NPR’s Greg Allen visited the Lower Ninth Ward and noted a desolate mood in the once-vibrant community. He wrote:

One of the first things you notice is the many empty lots, several on every street. Instead of houses, they now hold weeds and tall grass… Some streets are so filled with potholes, cars can’t drive down them. There are a few convenience stores and fast food stands, but no supermarkets or grocery stores.

Some residents in the neighborhood sold their properties to the state after the storm, Allen explained. Others wanted to rebuild their homes but did not receive enough federal money to cover the costs of reconstruction. 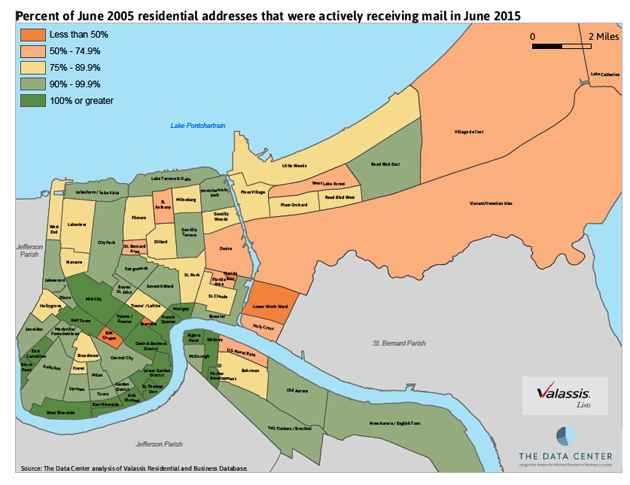 To evaluate the shifting population landscape, the Data Center tracked the number of households in New Orleans still receiving mail. In the map above, the dark orange block just above the Mississippi River is the Lower Ninth Ward. The other dark orange neighborhoods—with major population loss since 2005—include B.W. Cooper, Florida Development, and Iberville, where public housing sites were demolished to make room for mixed-income housing. The dark green neighborhoods, which have seen population growth, are mostly located in the “sliver by the river” or on the west bank, and they escaped the severe flooding that other parts of the city experienced. Recovery has meant gentrification in some of these neighborhoods, with higher-earning residents moving into previously working-class areas. 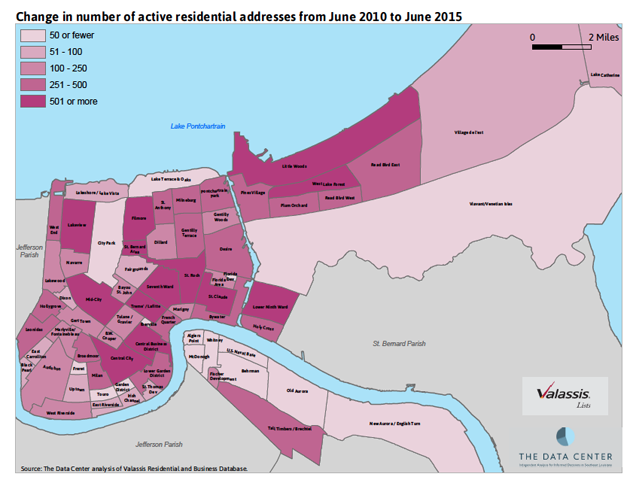 While the Lower Ninth Ward still has only a fraction of its pre-2005 population, it has seen some of the fastest population growth between 2010 and 2015. As shown in the map above, the Lower Ninth Ward and other neighborhoods that suffered the most flooding damage have seen the most change in active addresses over the past five years (dark pink areas). A city councilman told the Baton Rouge-based Advocate that developments like a Walmart supercenter and a new hospital in New Orleans East have encouraged more people to move into these neighborhoods.

What commercial development will mean for local culture remains unclear. Planners for a revitalization project in Iberville, one of the old public housing areas, say they will incorporate the area’s historic structures into their final design. “People move to New Orleans for the culture,” a city councilwoman told the Guardian at a panel on gentrification. “And you don’t change the culture, you become part of it. So the attitude has to be right.”