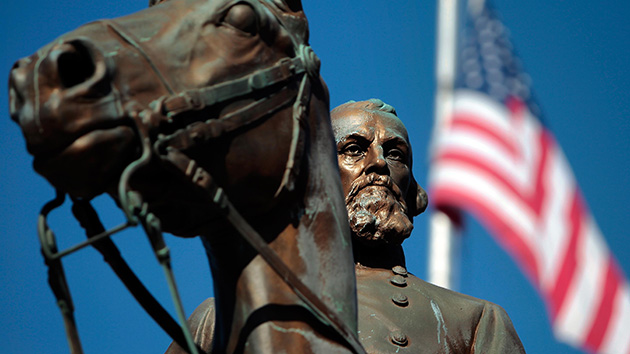 On Wednesday, the Memphis City Council cast its final vote to remove a statue of Nathan Bedford Forrest from a downtown park. Despite the considerable pushback against the decision, I can’t help but feel a little hope that progress is being made in my home state.

Not to be mistaken for the garish Forrest statue in Nashville, this one is a tarnished bronze likeness of the Confederate general, slave trader, and first Grand Wizard of the Ku Klux Klan. The statue tops a concrete burial vault that houses the remains of Forrest and his wife. The memorial has stood in Health Sciences Park (formerly Forrest Park) since 1905, when, 28 years after Forrest’s death, a group of wealthy, white Memphians dug up the general and his wife and entombed them in a vault beneath this statue in downtown Memphis. Astride his horse, Forrest faces north, positioned so he doesn’t seem to be retreating.

In the aftermath of the Charleston massacre and a renewed push to take down Confederate flags and other symbols of the Confederacy, the Memphis City Council voted to remove the statue and return the remains to Elmwood Cemetery, where Forrest was originally buried in accordance with his will. Surprisingly, much of the indignant outcry has surrounded the idea of moving the remains rather than removing the statue. In some of my recent personal conversations, people have expressed their outrage at such an “extreme” move. 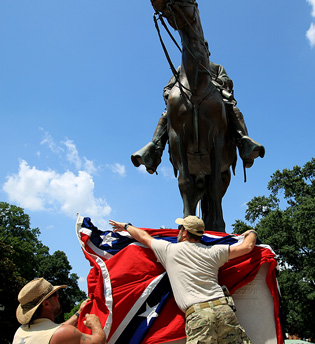 A Confederate flag is draped over the base of the statue of Nathan Bedford Forrest at a celebration of his 194th birthday in July. Mike Brown/The Commercial Appeal via AP

Indeed, they do. At the ceremony unveiling the statue in May, 1905, nothing was said of Forrest’s order to massacre more than 300 African-American Union soldiers who had already surrendered at Fort Pillow, Tennessee, in 1864. His role as a leader in the KKK was never mentioned. Instead, the Forrest Monument Association spoke of his chivalry, and of heritage and honor. As Nate DiMeo notes in a recent episode of his podcast, The Memory Palace, the statue was unveiled “at a specific moment in time”: The city’s African-American population was increasing, and racial tensions were building. The memorial was a tip of the hat to an idealized past, and those who supported it hoped the symbol would inspire a similar future. “Memorials are not memories,” DiMeo says. “They have motives.”

The emphasis on tradition, heritage, and honor sounds familiar to me. I grew up in a tiny farming community about an hour and a half east of Memphis, in a place where those values tended to come before equality and the respect for anyone who isn’t white. My history classes were full of winding excuses about how the Civil War wasn’t really about slavery. It was a struggle over state’s rights, and economic power. Obviously. Dixie was a place of hospitality and heart—if you were white. Nathan Bedford Forrest’s name was everywhere. It was attached to a nearby state park, a handful of statues, and even the ROTC building on my college campus. DiMeo sees the current controversy as a collision between the present and history, but I’ve been staring at that collision since I was too young to know what it was.

DiMeo says that despite Forrest’s alleged regret at the end of his life for his actions, he’s no American role model. He imagines adding a plaque to the Forrest statue and others like it. “Maybe [the plaque] should just say, maybe they should all say, that the men who fought and died for the CSA, whatever their personal reasons, whatever was in their hearts, did so on behalf of a government, formed for the express purpose that men and women and children could be bought and sold and destroyed at will,” DiMeo says. I tend to agree.

There are people I’ve known my whole life who are fiercely protective of the Confederacy and its symbols. They mean well when they speak of heritage and honor, but their pride comes at the expense of those who have suffered far worse than we ever have. Their refusal to recognize that perpetuates a racism that is so insidious that it is confused with cultural values.

I love where I came from. I love the mile-wide stubborn streak I inherited from my deeply Southern grandmother, a woman who is strong and outspoken, because as the daughter of poor sharecroppers, she had to be. I love the syrupy sound of our accents, and I love dark, heady summer nights filled with fireflies. I love being part of a community that is armed with casseroles whenever tragedy catches someone unaware. I do not love the Confederacy, and I do not stand for its murderous agenda or its skewed racial hierarchy. We cannot change the past, but as Memphis removes the statue and tries to move forward, so should the South. It’s time to separate the South from the Confederacy.

Listen to The Memory Palace episode on the Nathan Bedford Forrest statue, “Notes on an Imaginary Plaque…”