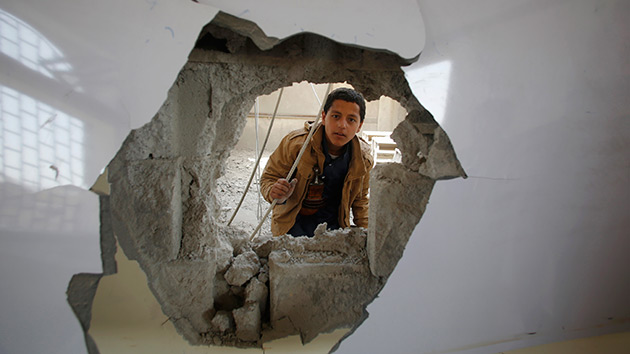 A boy looks into a school damaged by Saudi-led airstrikes in Sanaa, Yemen.Hani Mohammed/AP

On the night of July 24, Saudi-led coalition warplanes began dropping bombs on two residential compounds in the Yemeni port city of Mokha. A shaky video shot at the scene, a housing site for workers at a nearby power plant, shows a night cast in amber light with a soundtrack of explosions and screams. The video, released by Human Rights Watch (HRW) last week (see below), then shows the lifeless bodies of two young men, one with a stream of blood running from his eye, the other with a gaping wound where the side of his torso had been.

A day and a half later, HRW researcher Belkis Wille went to the scene of the bombing and asked the power plant’s housing supervisor if people had died in a particular apartment unit. “All of them,” Ali Ahmad Ragih answered. “How can you expect people to survive such a situation?…Bodies were taken out. Pieces of bodies. Hands…heads.” When the survivors tallied the damage, they determined that nine bombs had fallen, killing 65 civilians, including 10 children, and injuring dozens more.

Human Rights Watch has called the attack an “apparent war crime,” one that implicates the United States and the United Kingdom due to their supporting roles in the conflict, in which Saudi Arabia and nine other nations are conducting air strikes against Houthi rebels who effectively ousted the government of President Abdu Rabu Mansour Hadi in January. “Providing direct support to military operations, such as information on targets, would make the US and the UK parties to the armed conflict, and bound to apply the laws of war,” Human Rights Watch noted in a recent report.

The United States maintains that it plays a noncombat advisory role in Yemen. Yet one day after the Saudi-led air campaign, dubbed Operation Decisive Storm, was launched on March 26, the Pentagon announced the expansion of its role by providing Saudi Arabia with bombs, aerial refueling, logistics support, and intelligence—including live feeds from surveillance flights “to help Saudi Arabia decide what and where to bomb.” Additionally, the United States has equipped Saudi Arabia with billions of dollars worth of weaponry, including bombs and fighter jets.

So far, it is unknown who built or provided the bombs dropped on Mokha in July. “There are very few remnants left on the ground after these air strikes,” making it difficult to accurately identify the weapons, says Ole Solvang, a senior emergencies researcher at HRW. (A State Department official confirms that the United States provided support in the July 24 attack, but did not provide details of the type of support.)

Five days after Saudi Arabia launched Operation Decisive Storm, the first civilian casualties were reported: 31 civilians were killed in an air strike that hit a dairy factory, according to the United Nations. Reports of widespread civilian deaths have continued. As of July 21, the civilian death toll in the Yemen conflict has reached at least 1,693 with another 3,829 injured, the majority from coalition air strikes, according to the UN High Commissioner for Human Rights.

Saudi Arabia is currently the world’s largest importer of American arms. According to the Congressional Research Service, Washington and Riyadh inked $90 billion in weapons sales between 2010 and 2014, including the transfer of fighter jets, attack helicopters, missile defense systems, armored vehicles, and missiles and bombs. A 2010 deal worth $29 billion included 84 new F-15SA jets, and thousands of bombs to be loaded onto them. In April, a State Department official told Defense News that the United States is “making every effort to expedite security assistance to [Saudi] coalition forces.”

The body of a man is uncovered in the rubble of houses destroyed by Saudi air strikes in Sanaa, Yemen, in June. AP Photo/Hani Mohammed

Just two days after HRW accused Saudi Arabia of human rights violations, two new arms deals between the Saudis and United States were announced. One was for $500 million worth of explosives, detonators, fuses, and guided missile systems. Patrick Wilckens, an Amnesty International researcher on arms control and security trade, notes that this deal “seems to be specific to replenishing stock of the particular munitions that have been used in aerial bombardments.” The other sale was of $5.4 billion worth of PAC-3 Missiles and associated equipment, parts, and logistical support, meant to “modernize” and “replenish” Saudi Arabia’s missile stockpiles. The sale, US officials noted, would help “promote stability within the region.”

For many years, the United States armed the Saudis with little expectation that the weaponry would be used in combat. “The theory was that the Saudis mostly bought this stuff to cement the relationship with the United States, and the US would protect them if they were in a jam militarily. It was almost like a tacit alliance sealed with arms deals,” says William Hartung, director of the Arms and Security Project at the Center for International Policy. “Much of this equipment used to mostly just sit around. Now it is less a symbolic gesture and a money thing and is more likely to end up in the middle of a war.”

Human rights organizations say the United States isn’t doing enough to ensure the coalition is minimizing civilian casualties while deploying American weapons. “The fact that the US is a strong partner and is providing huge amounts of weapons, logistics, and expertise could be a cause for concern,” says Amnesty’s Patrick Wilckens. “The US, along with the UK and other governments, needs to put in place precautionary measures if there is a risk that some of their equipment will be used in bombing raids that could contravene international humanitarian law. We did research specific strikes and did find that there were not sufficient precautionary measures put in place to avoid civilian targets.”

Asked what preventative measures the United States is taking to mitigate potential casualties in Yemen, the official, who asked to remain unnamed, says, “Since the start of military operations in Yemen, we have called upon all sides to comply with their obligations under international humanitarian law, including by taking all feasible measures to minimize harm to civilians.”

“Much of this equipment used to mostly just sit around. Now it is…more likely to end up in the middle of a war.”

The Saudi coalition has also deployed US-manufactured cluster munitions that have been banned by more than 100 countries due to the danger they pose to noncombatants, which have harmed civilians. Reporting from Yemen in Rolling Stone, Matthieu Aikins recently described meeting a man who claimed that “a huge cluster bomb” had hit as many as 50 homes, killing and injuring dozens. The strike occurred in an area where “there are no military bases,” the man said. Aikins himself saw the casing of a cluster bomb and a half-exploded 1,000-pound bomb that were both made in the United States.

The Obama administration has downplayed concerns about civilian casualties from coalition bombing. On May 6, less than two months into the Saudi bombing campaign, White House Press Secretary Josh Earnest stated, “We certainly are pleased that the Saudis have indicated a willingness to scale back their military efforts, but we haven’t seen a corresponding response from the Houthi rebels.” Two days later, the Saudi coalition reportedly dropped leaflets on the cities of Sadaa and Marran, declaring them “military targets” and warning the residents to evacuate by seven that night. On July 6, in responding to a question on the Saudi-led coalition’s repeated destruction of civilian homes, State Department spokesman John Kirby said, “I’ll let [Saudi Arabia] speak to their operational capabilities and performance.”

Meanwhile, the administration has been making new arms deals with coalition members, which include some the largest recipients of US weapons and security assistance. In late May, the Pentagon announced a new $1.9 billion arms deal to Saudi Arabia that included 10 MH-60R Multi-Mission Helicopters, 38 Hellfire missiles, and 380 Advanced Precision Kill Weapons System rockets. Not long afterwards, an arms deal was reached with the UAE for more than 1,000 guided bomb units for use in Yemen and against ISIS. Notably, that deal includes the sale of MK84 bombs, which contain more than 800 pounds of high explosive. An Amnesty International investigation released in July identified fragments of a US-designed MK84 bomb, manufactured in 1983, that had destroyed three houses in a Yemeni village and killed 10 members of a single family, including 7 children. Amnesty says the same type of bomb has been used by the coalition across Yemen, including a strike that killed 17 civilians in May.

Shortly after the attack in Mokha, a resident of the housing complex that was bombed guided HRW’s Belkis Wille through the rubble. “I gathered all my daughters in my arms,” he recalled. “Here, in this place, I shielded them.” He led Wille to his home. “It was peaceful in here…There were children’s smiles here. They died,” he said as tears turned to anger. “They’re gone. Gone because of the war…the war…the war.”