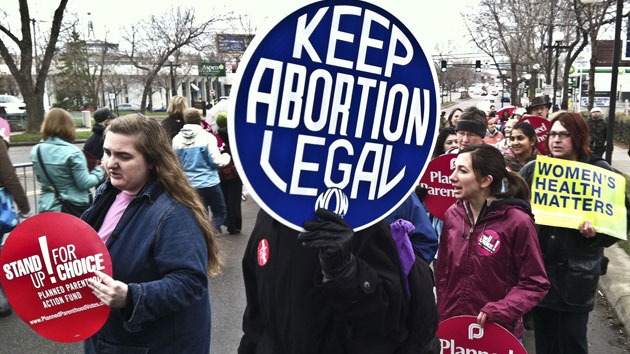 A Republican effort to strip Planned Parenthood of its federal funding came up short in the Senate Monday, with a Democratic filibuster leaving the bill from Sens. Joni Ernst (R-Iowa) and Rand Paul (R-Ky.) seven votes shy of the 60 needed for passage. But the failure of the measure, which aimed to take away more than $500 million in federal funding from the organization, is likely just a prelude to a fiercer debate to come.

Republican presidential candidates such as Paul and Sen. Ted Cruz (R-Texas) are threatening another government shutdown if federal money for the reproductive health and abortion service provider is not eliminated. Cruz told Politico that Ernst’s bill was nothing more than a “show vote,” and that when it comes to the real fight, he is willing to do whatever it takes to defund Planned Parenthood.

The recent conservative attacks on Planned Parenthood follow the July 14 release of two heavily edited video clips in which Planned Parenthood officials appear to be negotiating the sale of aborted fetuses. The videos, part of a conservative campaign against Planned Parenthood, were produced by a little-known anti-abortion activist named David Daleiden, whose group, the Center for Medical Progress, is associated with the anti-abortion organization Live Action. The video was circulated by Groundswell, a conservative strategy group, which Mother Jones’ David Corn reported on back in 2013. Groundswell includes such players as Ginni Thomas, the wife of Supreme Court Justice Clarence Thomas, and conservative journalists and commentators from outlets like Breitbart News, which broke the news of the first sting video.

A day after the first video was released, House Speaker John Boehner called for Health and Human Services Secretary Sylvia Burwell and President Obama to “denounce, and stop, these gruesome practices.” Louisiana governor and GOP presidential hopeful Bobby Jindal promised a state investigation, and Gov. Scott Walker followed suit in Wisconsin. Texas Gov. Rick Perry said the video was “a disturbing reminder of the organization’s penchant for profiting off the tragedy of a destroyed human life.” And Florida Sen. Marco Rubio tweeted, “Look at all this outrage over a dead lion, but where is the outrage over the Planned Parenthood dead babies.”

Federal funds cannot be used for abortions except in cases of incest or rape, or when the life of the mother is in danger, so the federal dollars in question are used for other services such as cancer screenings, family planning, and testing and treatment for sexually transmitted diseases.

Before the vote, Massachusetts Sen. Elizabeth Warren passionately defended Planned Parenthood. “I came to the Senate floor to ask my Republican colleagues a question: Do you have any idea what year it is?” she asked. “Did you fall down, hit your head, and think you woke up in the 1950s or 1890s? Because I simply cannot believe that in the year 2015, the United States Senate would be spending its time trying to defund women’s health care centers.”

Republicans repeatedly brought up the grisly image of Planned Parenthood profiting from the sale of fetal body parts. “I think all Americans should be sickened by this,” said Paul. “This debate isn’t just about abortion, it’s about little babies who haven’t given their consent.”

While the Senate debated the measure, Jindal announced that he was severing Louisiana’s Medicaid contract with Planned Parenthood. A third Planned Parenthood clinic is being built in the state, and it is the only one that would provide abortions. In a statement, Jindal wrote, “In recent weeks, it has been shocking to see reports of the alleged activities taking place at Planned Parenthood facilities across the country. Planned Parenthood does not represent the values of the people of Louisiana and shows a fundamental disrespect for human life. It has become clear that this is not an organization that is worthy of receiving public assistance from the state.”

Although the measure did not pass, Planned Parenthood President Cecile Richards warned that the debate would continue into the fall. “Anti-abortion politicians vowed to do everything in their power to cut patients off from care,” she tweeted after the bill failed. “Including forcing a government shutdown this fall.”