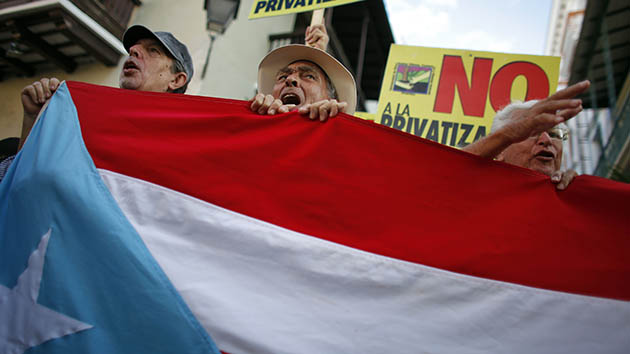 Puerto Rico’s economic crisis has only gotten worse in the month since Gov. Alejandro García Padilla told the New York Times the island’s $72 billion in debts was “not payable.” Earlier this week, the island missed a key bond payment, making history and setting the stage for a bruising and protracted battle with creditors. There are many reasons Puerto Rico finds itself in this quandary, including its murky political status, and the situation seems to be deteriorating as time goes on.

Here are the direst problems facing Puerto Rico—and the impact they could have on the upcoming presidential election:

Default: In June, when García Padilla called on Congress to pass legislation that would allow Puerto Rico to get its debt in order under the US bankruptcy laws that apply to the 50 states, the idea that the island would default on loan payments was mostly theoretical. That’s not the case anymore. The island’s government paid just $628,000 of a $58 million debt payment due this week, triggering the first default since the island was taken over by the US in 1898. No state has defaulted since Arkansas failed to make its bond payments during the Great Depression in 1933.

The default complicates an already complicated situation. Since current law doesn’t allow Puerto Rico to authorize its cities and publicly owned entities to seek bankruptcy protection through the courts, the island’s government has to negotiate with each of its lenders individually. As anybody who has ever borrowed money knows, interest rates go up when your credit goes down. Puerto Rico’s default, without any congressional intervention to change the bankruptcy laws, will likely lead to much more expensive borrowing in the future. “[The default] is consistent with our belief that Puerto Rico does not have the resources to make all of its forthcoming debt payments,” Moody’s Investors Service Vice President Emily Raimes said in a statement this week. “This is a first in what we believe will be broad defaults on commonwealth debt.”

No Help From Congress: When American cities and political entities such as towns, water districts, counties, and publicly run corporations face similar financial problems, they reorganize their debt under Chapter 9 of the US Bankruptcy Code. Detroit, which filed for bankruptcy in 2013, is perhaps the best-known example of this, but according to Governing magazine, it has happened nearly 50 times in the US since 2010. Federal bankruptcy law specifically excludes Puerto Rico, which means that the island’s government is forced to negotiate directly with a range of lenders, all of whom have different requirements and some of whom recommended closing schools, cutting university subsidies, and firing teachers to repay the debt.

Pedro Pierluisi, Puerto Rico’s non-voting representative in Congress, has more than once introduced legislation that would allow Puerto Rico to be treated like the states when it comes to US bankruptcy laws, but it has gone nowhere. More recently, Sens. Chuck Schumer (D-N.Y.) and Richard Blumenthal (D-Conn.) introduced an identical bill to Pierluisi’s, but some Republicans continue to oppose the idea on the grounds that it’s a backdoor bailout, so any relief coming from Congress is unlikely.

Medical Issues: Puerto Ricans face a host of problems as a result of the economic implosion, but a looming health care crisis might be the most serious. As the New York Times reported over the weekend, Puerto Rico is bracing for large cuts to a Medicare program called Medicare Advantage, which is being pared back under the Affordable Care Act. The result is that tens of thousands of Puerto Ricans are expected to face higher copays, reduced services, and a shrinking network of already stressed doctors. Puerto Rico’s Medicaid program, which serves nearly 1.6 million people, is also in danger of running out of federal grant money by the end of 2016. If the financially strapped government can’t come up with funding, as many as 900,000 people could get dropped from the program, according to the Times—and funds are hard to come by these days.

The lack of Medicaid funding is partly responsible for $25 billion of the island’s $73 billion debt burden, because the government has had to borrow to make up Medicaid funding gaps. Puerto Ricans pay Medicare taxes (along with many other federal taxes), but the federal government’s funding to the island is capped, forcing Puerto Rico to try to make up the difference.

All of this helps explain the mass exodus of doctors from the island, who are leaving at a rate of about one per day for work in Florida, New York, or other states. The rate is expected to climb, further exacerbating the health care woes of a place that already has too few doctors serving the population.

The Effect on Mainland Politics: Doctors aren’t the only ones abandoning the island. As US citizens, Puerto Ricans can freely move to the US mainland, so now, there are more Puerto Ricans living on the mainland than on the island. The growing number of Puerto Ricans moving to the US, mainly Florida, will likely play a big role in the coming presidential election. As the Washington Post reported last week, politicians hoping to win Florida will face problems if they don’t have Puerto Ricans backing them up at the polls. “Puerto Ricans are the swing voters in the swing region of a swing state,” former Puerto Rico Secretary of State Kenneth McClintock told Mother Jones in July. “So, come March of next year, the presidential primaries in Florida will be very important in terms of what is done with Puerto Rico in the future.“