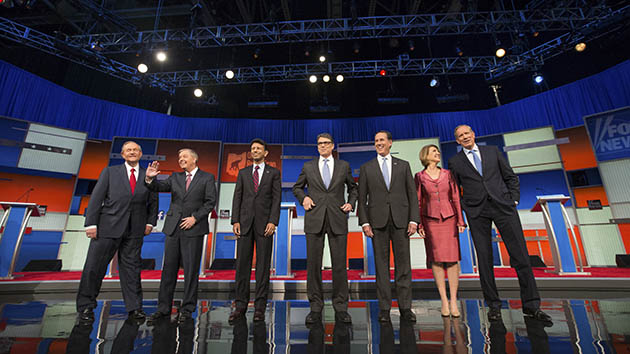 Fox News raised hackles when it announced the selection criteria for the first GOP presidential candidate debate: only the top-10, based on an average of selected national polls, would be allowed into the primetime debate. Rick Santorum called it “preposterous,” but Fox had a solution. It would put on a pre-debate debate a couple hours before the main event, featuring the candidates that weren’t quite fit for prime time. It wasn’t a perfect solution, but at least they’d get a chance to air their views. But it was quickly clear that these were second-tier candidates, at least based on the way moderators Martha MacCallum and Bill Hemmer framed the early questions:

First question, essentially: aren’t you a loser whose time has long passed. #FoxKiddieDebate

Summary of #kidstable so far: Who are you? Why are you a loser? What about Donald Trump, who is a winner? Who should we bomb, and how much?

The B-team feel was also reinforced by a largely-empty Quicken Loans Arena:

FYI this second-tier debate will be applause-free because there’s pretty much nobody here except reporters.

He said it in an empty theater https://t.co/PALLWrSjzO

But that’s not to say the candidates didn’t say interesting things. There were flubs:

And a sleepy Sen. Lindsey Graham saying some rather interesting things about women’s rights:

Lindsey Graham’s Answer on Abortion: Come with Me to the Middle East http://t.co/0V54lfIRYn (VIDEO) pic.twitter.com/B60a6gwgCH

Ladies, you’re better off with us than the Taliban so why don’t y’all just keep it down.

But maybe that paid off?

Rick Santorum also had some interesting things to say, although not in the way he probably wanted:

Thanks for this, Rick Santorum pic.twitter.com/ylXdniEHFA

Rick Santorum: “How optimistic about America am I? My wife and I COULD NOT STOP COPULATING.”

The question the candidates had the most difficulty with was providing a two-word description of Hillary Clinton:

Carly, after this debate. pic.twitter.com/fsSMakCpoF

She might have been the only one to really move the needle, as most of the candidates will likely continue to poll in the low single digits:

While Fiorina delivered a relatively strong performance, the second-tier GOP candidates struggled to break through http://t.co/SAg7iLuNiu

OK! The first debate night is done. Have a great night everyb-Wait, what? Oh, s**t