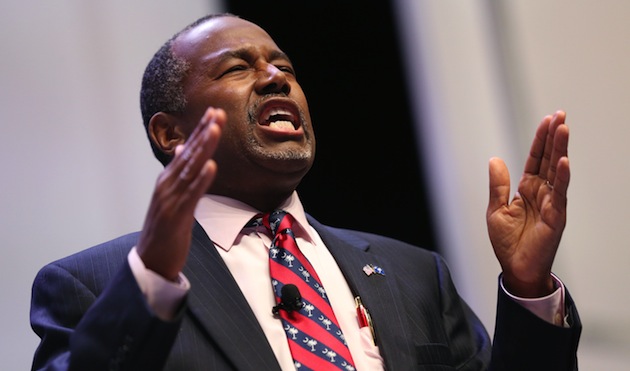 Ben Carson, one of the top-tier contenders in the GOP presidential primary, has long been known as an ardent creationist. He has debated prominent scientists who defend evolution, and it’s no secret that his advocacy of creationism springs from his deep faith in the Seventh-day Adventist Church, a Christian religion established in the mid-1800s. Creationism is a core belief for many Seventh-day Adventists, and one of the religion’s founders, Ellen White, was one of the first purveyors of the notion that the Earth is merely 6,000 years old.

This week, Carson, a retired neurosurgeon, took some heat for his creationism when Buzzfeed reported that during a 2011 lecture that was part of a “Celebration of Creation,” Carson decried the Big Bang theory and asserted that Darwin’s theory of evolution was “encouraged” by Satan.

In that talk, Carson did take slight issue with White and those creationists who claim the Earth came into existence just several thousand years ago. He noted, “I am not a hard-and-fast person who says the Earth is only 6,000 years old.” Yet Carson quickly added, “I do believe in the six-day creation.” And he meant literally six days, not metaphorical days—that is, not days that might have lasted millions of years.

So Carson may not be hard-and-fast on the when of creationism, but he is a biblical literalist on how long it took for the living Earth and all its inhabitants to come into being: six days.

Carson’s belief is a personal matter, but his fundamentalist religious views may have a political consequence. If Carson, a political novice who has recently placed second behind Donald Trump in many polls due to the support of evangelical GOP voters, actually believes that Satan actively encourages evolution and other misguided notions, then does he consider his adversaries in political or scientific debates to be the useful idiots of the devil? If so, can he accept the idea of compromise or collaboration with those being encouraged and exploited by the Prince of Darkness? His belief in six-day creationism is not merely a curiosity. It is tied to a deeper belief that may profoundly skew how he sees his opponents and the workings of the political world.