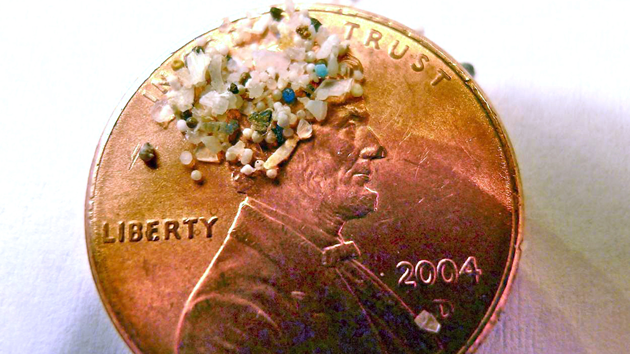 A sample of microbeads collected in Lake Erie5 Gyres Institute

On Friday, the California Senate passed legislation that will ban the sale of microbeads—?those colorful bits of plastic that you find in face scrub, body wash, and toothpaste—in personal care products by 2020.

Though a handful of other states ?have already passed microbead bans, California’s is by far the most stringent, as it doesn’t provide exemptions for “biodegradeable” plastics. (No plastics have proven to break down in marine environments so far.) Because California makes up roughly one-eighth of the American market for personal care products, the legislation will likely change the way the products are designed throughout the United States.

Johnson & Johnson and Procter & Gamble lobbied against the bill, which is expected to pass the State Assembly next week and be signed into law within the month.

Environmental advocates have expressed concern over microbeads for years, as the particles are so small that they aren’t caught in wastewater treatment plants and end up in waterways and oceans, where they don’t biodegrade and are frequently mistaken for food by fish and other marine animals. There are an estimated 300,000 microbeads in a single tube of face wash; collectively, roughly 300 tons of the plastic ends up in US waterways each year.

“Toxic microbeads are accumulating in our rivers, lakes and oceans at alarmingly high levels. We can and must act now,” said assembly member Richard Bloom (D-Santa Monica), who authored the bill. “Continuing to use these harmful and unnecessary plastics when natural alternatives are widely available is simply irresponsible and will only result in significant cleanups costs to taxpayers who will have to foot the bill to restore our already limited water resources and ocean health.”