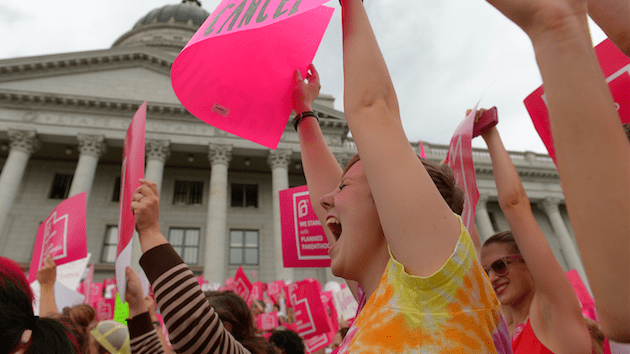 On Wednesday, the House Judiciary Committee held a hearing into the undercover sting videos that allegedly show Planned Parenthood employees selling fetal parts in violation of federal law. The videos, which are the work of a secretive anti-abortion group, have been heavily and deceptively edited. Still, the hearing, like so many previous attacks on Planned Parenthood, is part of a larger campaign to strip the group of millions of federal dollars it uses to support family planning care.

The claims in the edited videos are not the only deceptive element of the hearing, which is titled “Planned Parenthood Exposed: Examining the Horrific Abortion Practices at the Nation’s Largest Abortion Provider.” In his opening statement, Rep. Trent Franks (R-Ariz.) claimed that Planned Parenthood uses “much more painful methods like partial birth abortion” to better preserve fetal organs for sale. “More than 18,000 late-term, pain-capable unborn babies were torturously killed without anesthesia in America last year,” he continued. “Many of them cried and screamed as they died.”

The idea that abortion entails “fetal pain” is a popular anti-abortion myth—one Franks has articulated before in order to justify a 20-week ban on abortion, called the “Pain-Capable Unborn Child Protection Act.” But that flies in the face of the medical consensus, which is that the systems necessary to sense pain are not developed until the fetus is almost full-term. The idea that fetuses “scream and cry” during abortion is also the product of a deceptive anti-abortion video: the 1984 film The Silent Scream, which purports to show a fetus contorted with pain.

The first witness, Gianna Jessen, who was born after an unsuccessful abortion, also repeated the argument that there are other facilities capable of safeguarding women’s health if Planned Parenthood were to lose federal family planning funding: “We often hear that if Planned Parenthood were to be defunded, there would be a health crisis among women without the services they provide. This is absolutely false. Pregnancy resource centers are located nationwide as an option for the woman in crisis.”

But pregnancy resources are only a fraction of Planned Parenthood’s business: STI screenings, Pap tests, and pregnancy prevention comprise the vast majority of its activities. The group provides contraception to almost 40 percent of women who rely on public programs for family planning. And a New York Times investigation recently showed that women—particularly poor women—would face an enormous struggle to find reproductive health providers if the country’s largest women’s health network was no longer an option. Planned Parenthood, unlike many other providers, have a broad ability to accept Medicaid patients. The Times notes that four out of five Planned Parenthood patients have incomes below 150 percent of the poverty level at a time when two-thirds of states reported difficulties ensuring enough health providers, especially OB-GYNs, for Medicaid patients.